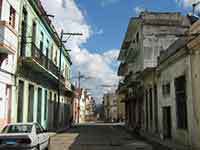 The State Council of Cuba with Raul Castro at the head has unveiled a draft law which allowed the citizens of the Island of Freedom to start private business activities and hire employees. Thus, the Cuban government points a direction to nearly 500,000 employees of the key state sector in the economy of the country, whom the authorities plan to dismiss.

The international community showed a very positive reaction to the news. The UN General Assembly recommended the USA should finally lift the economic embargo against Cuba, which was introduced against the nation decades ago.

Official representatives of 187 countries supported the adequate resolution, although the USA and Israel voted against it. Three other countries abstained from the vote, Interfax reports.

Cuba introduced a new Tax Code on October 16. The current list of private businesses includes 17 profession only, but it is planned to expand the list in the future. The Cubans individually employed in the private sector will have to pay ten percent of their income to the budget.

One will have to acquire a license for running private business and opening several firms. The Cuban authorities have already issued 140,000 private business licenses and plan to issue 250,000 more. The government hopes that it will thus be possible to avoid epidemic unemployment, and hundreds of thousands of state officials, who will be fired in March of 2011, will find new jobs in the private sector.

For the time being, there are over 5 million able-bodied people in Cuba: 75 percent of them work for the state, and 23 percent are employed in the private sector.

This will be it. There will be no full transition to the market economy in Cuba in spite of the fact that the Cuban government takes efforts to attract foreign investments.

The current political regime in Cuba does not mix with market freedom of capitalism, and any reforms towards liberalization will be scrapped before they start to affect the ability of the Castros to hold power on the island.

Legal opportunities of foreign capital in Cuba are restricted as well. Foreigners are allowed to open only joint ventures there.

Citizens of Venezuela make the only exception from the rule. They are allowed to possess their businesses entirely. Strong political ties between Cuba and Venezuela is just another fact to prove that Castro is not going to drastically change the economic structure of his nation.