Russian high-speed trains to pay back only in 16 years 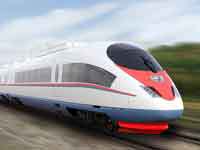 Russia's new Sapsan high-speed trains that travel from Moscow to St. Petersburg and Nizhny Novgorod have become the most successful passenger trains in Russia. The profitability of state-of-the-art trains is 30 percent, although many other passenger transportations of Russian Railways are not profitable. The head of Russian Railways, Vladimir Yakunin, said that he was interested in purchasing eight more highly expensive trains.

According to Vedomosti, Mr. Yakunin disregarded capital costs in his calculations - the preparation of the infrastructure, the construction of depots, and even the purchasing of the trains themselves.

According to Mr. Yakunin, Sapsan trains have proved to be successful because it is the Russian Railways corporation that regulates the ticket prices for them. The tariffs for other types of short-distance and long-distance transportation are regulated by Russian regional and federal authorities.

Conventional trains that travel between Moscow and St. Petersburg are only 84.5 percent booked, officials of the monopoly said. Russian Railways' income from Sapsan ticket sales may reach 205 million euros a year.

As a matter of fact, the total spending on acquisition, technical preparations, railway repairs and construction of depots made up 45.22 billion rubles. Three pairs of Moscow-St. Petersburg trains return the monthly profit of not more than 231 million rubles. Therefore, the project of high-speed trains in Russia is not going to pay back during the upcoming 16 years.

In 2006-2007, Russian Railways signed a contract with Germany's Siemens to purchase eight Sapsan trains in the amount of 276 million euros and concluded another contract for technical servicing for 30 years (354.1 million euros - 11.8 million euros a year).

For comparison, China concluded a contract for construction of 100 high-speed ICE trains for 750 million. The difference is very impressive. However, Russia does not have an alternative for developing state-of-the-art high-speed transport. That is why, Russian Railways intends to purchase additional four or eight trains for the route Moscow-St. Petersburg.

Yakunin also said that the monopoly considers an opportunity of opening new high-speed routes with European capitals - Berlin and Paris, for example.

"There is a real idea to launch high-speed trains between Moscow, Berlin and Paris. The passenger traffic on these directions is quite intense. The journey from Moscow to Berlin takes 36 hours now, but faster trains running at the speed of 200-250 km/h will cut the time to 24 hours," Yakunin wrote on his blog.