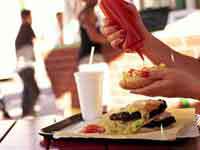 There is still plenty of room on the Russian fast food market. Another fast food company plans to open ten restaurants in Moscow and St. Petersburg each next year. Afterwards, the company plans to conquer other regions of Russia.

Moscow and St. Pete will soon have Wendy's. US billionaire Nelson Peltz, the owner of Triarc, bought the fast food chain in 2008. Since then, Wendy's has evolved into USA's third largest fast food restaurant chain with over 6,600 restaurants in the USA, Canada and other countries.

Now the company plans to enter the Russian market. It may seem at first sight that Russia is packed with fast food already. McDonald's primary competitor - Burger King - entered the country in 2009. Carl'Junior has been developing very actively this year. Now we are expecting the arrival of Australia's County Chicken. All this means that the potential of the fast food market in Russia has not been exhausted. Rents have dropped by nearly 40 percent in many cities, consumers want to eat fast and cheap - all this inspires expansion.

Wendy's already plans to open 180 restaurants in Russia nationwide. The chain will appear on cross-country roads, petrol and railway stations - the locations that other competitors do not target yet.

The chain will start with large cities, which is a win-win situation for fast food companies. An opinion poll conducted by Russia's major research center VTSIOM showed that fast food restaurants attract residents of the Far East (36%), Moscow or St. Petersburg (33%), males (36%), educated (27%), financially secure individuals (2%) aged from 18 to 24 (45%).

It goes without saying that practically 50 percent of the whole Russian fast food market is concentrated in Moscow and St. Petersburg. Moscow has the advantage at this point where the average salary makes up 35,600 rubles ($1,186) a month vs. 24,400 ($813) in St. Pete.

Experts say that many customers of restaurants and cafes have changed their preferences to fast food chains in Russia. Last year, the market of fast food in Russia reported a growth of 15 percent against the background of the declining market of catering food services (12.6 percent) and made up 623 billion rubles. McDoland's, Subway and Kroshka-Kartoshka (a Russian company) opened the largest number of new restaurants in the country.

Russians start losing their fondness for instant noodles. The consumption of this product in the country dropped from 31 percent in 2006 to 19 percent in the first half of 2010. Researchers explain the declining sales of instant noodles with the Russians' choice of healthier food.

However, the growing market of fast food in the country testifies to the opposite. Most likely, those who regularly purchased instant noodles before have moved to other segments of fast food, such as pancakes, varenikis (curd or fruit dumplings) etc.

It is worthy of note that Russian pancake houses - a healthier alternative to Western fast food chains - are quite capable of winning a considerable share of fast-eating Russians. Pancakes, or blinis, is a traditional Russian dish, and more importantly - it is less expensive than hamburgers, fried chicken, etc.

Large shopping malls prefer to work with recognizable Western brands, but the Russian food has all chances to win its place under the sun of fast food.