Russia needs to cut tentacles of the state in economy 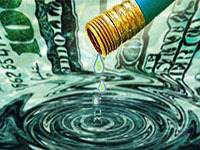 The Russian economic model must change to ensure stable economic growth to the country. Nearly all developing economies of the world have retrieved the growth which they had prior to the economic crisis. Russia is expected to achieve the same by 2011. The Russian economy mostly depends on oil and gas, and the state shows two much presence in the economy - these are two biggest problems of the Russian economy, according to Newsweek magazine.

During the recent decade, the Russian economy has been growing on the factors typical for developing markets. Russia's growth became possible owing to excessive liquidity on world markets and the growing prices on raw materials.

The Russian economic model must be revised, Newsweek believes. Russia needed a strong political hand at the end of the 1990s to stabilize the system, when the average income per capita made up nearly $1,500 a year.

The rules of the game have changed after ten years of renaissance and the growth of the population income to $10,000 a year. The centralized state administration (the share of the state in the national economy makes up 50%) hampers the further economic development of Russia, the magazine wrote.

It is not the first time when a foreign publication offers the Russian Federation to develop innovative and high-tech branches of industry. According to the magazine, Russia needs to cut the tentacles of the state to be able to improve the investment climate.

The share of small business of the total number of Russian companies is lower than in any other large economy of the world. According to the World Bank, Russia takes the 120th position on the list of 183 countries on the simplicity of organization and performance of business.

The entrepreneurs, who try to launch their business, complain of red tape and unavailability of appropriate loans. The share of investments in the economy makes up only 20 percent.

Such countries and South Korea and Taiwan achieved a six-percent growth of their economies even after the average income per capita climbed higher than $10,000. It became possible because the countries had created a favorable environment for the development of small business.

"In Russia, the companies of the small business segment of the market return only 20-25 percent as opposed to 60 percent in China. Small business in China generates nearly 60 percent of all exports in the country," financial expert Anton Safonov told Pravda.Ru.

Nevertheless, it would not be correct to compare Russia, a huge country, with small, densely populated Asian countries in economic terms. The development of innovative branches does not have to be connected strictly with liberties for small business.

It seems very surprising that the Russian government seeks help from private-owned companies and foreign investors to reanimate the economic infrastructure at the time when a barrel of oil costs $80, Newsweek wrote. In general, the magazine concludes, the more developed Russia needs a different model for its development.