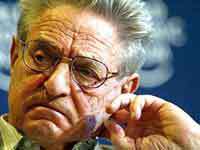 America celebrated Columbus Day Monday October 11, but there was another celebration taking place later that day. No, it was not when they threw a book at Obama or even when the streaker went by him. Multi-billionaire George Soros threw in the towel.

According to the New York Times Sewell Chan, George Soros has seen the light and is no longer supporting the Democratic Party in America. In regards to the Republicans Soros said,

"I'm not in a position to stop it. I don't believe in standing in the way of an avalanche"

Sounds like Mr. Soros is calling a Republican victory before the November elections. Wow! I wonder what Obama and the Democrats feel like now? It's like seeing their own Father leave before the football game is over. "Wait, Dad! We can still win!", they nervously shouted. Soros just mumbled obscenities and drove off to get drunk. It makes one feel sorry for the Democrats. Not really.

The "Democrat Daddy" has left a sinking ship. Too bad, so sad. Now the Democrats are orphaned and alone. Soon the fighting will begin within the party. Why, Daddy, why?

"I made an exception getting involved in 2004 and since I didn't succeed in 2004, I remained engaged in 2006 and 2008. But I'm basically not a party man. I'd just been forced into that situation by what I considered the excesses of the Bush administration.", said Soros.

Not a party man? He donated millions directly to the party. He donated millions more to Media Matters and moveon.org which are just a couple of businesses within his network. He hated Bush and hated when Bush was re-elected. Oh, well. His betrayal of the Democratic party proves he is not willing to invest his money in a lost cause, but it also shows his lack of conviction. It's a scandal to those who thought he was a man for Democracy.

Don't be fooled. Soros is backing off from the Democrats because he is afraid of being arrested by the U.S. government. Georgie Soros made a mistake when he invested in Petrobras from Brazil. Soros owns Obama so that is why the American government helped Brazil. When Americans needed help from Obama during the Gulf Oil crisis, Obama told Americans to stop drilling in the Gulf and sent billions to Brazil so they can drill offshore. Reuters, Bloomberg, Agence France Press ,the Wall Street Journal and now even Fox News have all reported this.

DiscoverTheNetworks.org shows the network of Soros. He is the Syth Lord whose network is so huge and his money limitless that by a mere whim he could make half the world ignore God himself. Wait, he's already done that. Many are already his zombies devoid of any independent thinking. Soros' web is so vast I decided to put the link here. Keep in mind he finances them all.

David Horowitz was a liberal. His parents were communists. Horowitz later became a conservative. His book, "The Shadow Party:" explains: Soros and the Democratic party connection.

You can see it here

His zombies think of him as a philanthropist and a savior of the world. Maybe they too, like the Obama maniacs, will break the evil spell they are under. Here are some info I'll give them..

Calvina Fay of the Drug Free America Foundation declared billionaire George Soros to be an "extremely evil person" who wants to legalize dangerous mind-altering drugs. Fay said that Soros, an atheist who is a major funder of the Democratic Party and liberal-left causes, is "our common enemy" and that he is determined to subvert traditional values and undermine America's families.

In the next video, Soros admits he helps Democrats and wanted to remove George Bush even though he supported the Bosnia war during the Clinton years. OK for Clinton but not Bush. Soros seems like a nice old man. Soros has been called a hypocrite for wanting the rich to pay more to help the poor but he evades paying taxes. Watch here how angry he gets when the interviewer asks about his other businesses he avoids paying taxes on.

Leave him alone! He's just an old man. Yeah, right. That's what they said about Nazi Adolf Eichmann when Israel's Mossad captured him. As you probably are not aware, Soros is a Jew but not a practicing one. He is an atheist whose real name is Schwartz. Soros is an admitted Nazi collaborator who betrayed his own Jewish people to Adolf Eichmann himself. He just told them he was a Christian and helped the fascists also capture the Jew's wealth.

From Hitler to Soros http://www.youtube.com/watch?v=ehRqMr2wRFE

Soros is just a crook. He is a felon. He was convicted in 2002 for insider trading in France. For more information on Soros you can see his summary here

It's Judgement Day for the Democrats in November. That day will arrive for Soros in time. As they say regarding the long arm of the law, "You can run but you cannot hide".