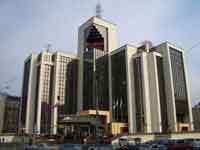 Lukoil, the second largest oil producer in Russia, wants to enter the Asian markets. Currently, the company's shares are traded in New York, London and Frankfurt. Recently, the company's management purchased a part of its holding of shares from ConocoPhillips. These shares may go to the Asian trading floor that picked up the interest of the Russian companies after the IPO of Rusal.

Even UC Rusal pinned down by debt has managed to attract over $2 billion to Hong Kong IPO, although since then the company's shares have lost nearly 40% of the cost. Booming Asian markets would swallow the shares of Lukoil with even more gusto. In addition, Asia likes raw materials issuers.

Listing on the Asian trading floor will allow the company to attract a significant number of portfolio investors and will be a good start for the expansion of the company to prospective markets. The company has no plans to reduce the volume of trading on other floors.

The main financial events of the recent time for the Russian oil companies are changes in the shareholder structure. U.S. ConocoPhillips owned 20.6% of stake in Lukoil, and decided to sell its stake. The Americans are planning to completely sell out the portfolio by 2011.

Russia Today: Lukoil buys up more of its shares from ConocoPhilips

The Russian company has used the proposed option for the portfolio and made a buy-out in two stages: for 7.6% of its stake Lukoil paid $3.44 billion (at $53.25 apiece). And then, with the technical assistance of UniCredit, another 4.99% of the stake was purchased for $2.38 billion. These shares were resold to the bank sponsoring the deal.

After a couple of days, the bank issued notes with the possibility of conversion into shares of Lukoil. Lukoil purchased the notes for $1 billion (and 2.1% of shares). The notes for the remainder of the portfolio (2.9%) were bought for $1.4 billion by the company president Vagit Alekperov.

"Not to say that the news about the plans to trade on the Asian trading floor is unexpected. A few days earlier there were speculations that the shares bought from ConocoPhillips (we are talking about 13% Lukoil portfolio), would get to some strategic investors. Now it is obvious that they can go not to the strategy but retail. In addition, it was confirmed that the management of Lukoil was not going to pay them off as the treasury," comments on the situation for Pravda.ru Anastasia Sosnova, an analyst of Investkafe.

As explained by Vice President Leonid Fedun, an additional issue will not take place, and the amount of securities to be placed in China will depend on the demand. Against the stagnation of Western stock exchanges, Asia is trading at higher revs. In 2009, at the Hong Kong stock exchange leading in the region, the companies cumulatively attracted $32 billion during the IPO, which was the best index in the world.

"The purpose of trading on the Asian floor is not only the deployment of a broader range of investors (in Hong Kong or Singapore, the mainstream American and European investors are also accompanied by Asian ones), but also an increase in brand awareness on the promising Asian markets. Thus, trading on the Asian floors for Lukoil, in my opinion, is the perfect accompaniment to its plans for gas supplies from Uzbekistan to China," says Anastasia Sosnova.

According to the analyst, from the perspective of cooperation with Chinese partners, Lukoil is better off trading on the Hong Kong Stock Exchange, as Chinese investors prefer shares circulating there. In addition, the Hong Kong Stock is visited by a huge number of retail investors who can contribute to the placement of shares at a higher price.

"There is only one strange thing - a weak reaction of the Russian investors to the rather positive news. Quotes of Lukoil rose with the market - only by 0.8%. However, a speculative explanation of this fact is the continuation of sales of Lukoil shares by the U.S. company Conoco. After the buyout Conoco had 6.15% stake in Lukoil, now, according to Leonid Fedun - just 4%. However, despite the fact that Lukoil shares are a little "pressed" by Conoco sellout, I expect that by year's end the quotation of the company to grow to $70 apiece," concludes the analyst of Investkafe Anastasia Sosnova.