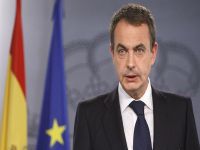 The general strike on September 29 against the labor reform decided by the government of José Luis Rodríguez Zapatero is the opening of a probably hectic social season. The government has promised to submit a new bill to Congress before the end of the year intended to increase from 65 to 67 the legal age of retirement and extend the period of computation for determining the amount of the pension, from the previous 15 years of work into the last 20 ...

In addition to labor reform and the decree last May that lowered the wages of civil servants, froze pensions and cut public works spending, this project increases the wrath of the unions and many of the workers.

Beforehand, the President presented his government's decision as irrevocable: "The day after the general strike," he boasted in Tokyo on September 1, he continued with the same attitude. "This encourages unions to provide new and additional days of protest."

In its intransigence, the Spanish government is modeled after other European governments. In France, despite three recent mass protests against pension reform, President Nicolas Sarkozy has reiterated that he will not change the law. In Greece, six general strikes in six months have been ignored by Prime Minister George Papandreou.

Relying on the principle that in a democracy, policy is decided in Parliament and not in the street, these leaders ignore the distress of large social groups to resort to strikes or street demonstrations, expressions of social democracy to reflect specific complaints.

(1). Acting in this way, these governments make mistakes. They behave as if the electoral legitimacy was being imposed on other forms of legitimacy and representation, and in particular about the legitimacy of social democracy.

(2). In any case, this inflexible attitude may encourage the discontented masses, in a second stage, to reject social dialogue and seek confrontational clashes. Above all that, since last May with the announcement of a brutal adjustment plan, the disgust of an important part of Spanish society has not stopped being exacerbated.

(3). Among the nearly five million unemployed, precarious workers, unemployed youth, women wage earners, small officials and families...with of all of them lies the conviction that they have been sacrificed by those in charge.

At the same time, through the bank-rescue fund, the government transferred to the banks and savings institutions (responsible for the housing bubble) up to 90 billion euros ... Not looking to significantly increase the taxation of higher incomes, or create a tax on large fortunes, or reduce defense budgets (about 8,000 million euros per year) or the financing of the Catholic Church (about 6,000 million euros) , or even the budget of the royal family (almost 9 million euros) ...

What upsets many citizens is the assurance that the government has taken such regressive measures against the wage earners because of the European Union and the International Monetary Fund. And under pressure from financial markets, under threat of not investing, they demand lower wages and lower living standards. In fact, it was admitted to a group of Japanese investors by President Zapatero: "We are dealing with," he confessed, "reforms that mostly concern international investors."

(4). And before the senior management of major investment banks and investment funds in the United States they reiterated that such measures were taken "so that the investors and markets value the firm determination that I have to make the Spanish economy be competitive."

(5). The labor reform has no relation to cutting the budget deficit and the reduction of state budgets, the major requirements of the financial market . But since the government cannot devalue the currency to stimulate exports, they decided to favor the collapse of wages in order to become more competitive.

The worst thing is that these very unwise measures have few guarantees of success. The unemployment data registered in August, with the reform already in place, shows that 93.4% of the realized contracts were temporary ... In other words, insecurity continues to dominate the labor market. The only difference is that now, the dismissal turns out to be cheaper for the businesses.

After the crisis in the 1990s, unemployment took thirteen years to be reduced to the average European level, in a time when the growth rate was very strong and Spain received massive European structural funds. Today, with this labor reform and a long-term forecast of stunted growth, "employment in Spain, according to U.S. economist Carmen Reinhart, will not recover to the 2007 levels until ... 2017."

(6). Meanwhile, rejected by its own constituents, this government will have probably lost the power and direction of the country and ceded it to the conservative and populist opposition. It is usually what happens, it is what we saw in Germany, the UK and more recently in Sweden, where leftist parties deny themselves and they unashamedly choose right-wing politics.

Notes:
(1) The democratic vote, precisely because they are general and universal, does not always allow the expression of particular sensitivities.
(2) Read Rosenvallon Pierre, "Le pouvoir contre l'intérêt général", Le Monde, Paris, September 21, 2010.
(3) According to a recent survey by the Centre of Sociological Investigations (CIS), the PSOE lost 3.1 points. Only 2.5% of respondents said that the economic situation is good or very good, compared to 22.6% who consider regular and 74.4%, which is defined as poor or very poor.
(4) El Pais, Madrid, September 1, 2010.
(5) Ibid, September 21, 2010.
(6) Ibid, September 12, 2010.