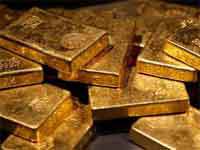 Gold added nearly five percent to its cost on world markets in September setting absolute records almost every day during the month. Even if gold dropped a little on the last day of September due to the growth of the US dollar against world currencies, analysts are certain that the precious metal will continue to set more new records in the future.

Gold may show the growth of its cost for ten years running, which will become the longest period of the price growth on the precious metal, at least since 1920.

"The uncertainty in world economy and recent talks about inevitable program quantitative easing No. 2 in the USA have boosted the demand on the tools, which investors closely associate with something safe and reliable. Gold is the ultimate refuge at this point as many still refer to this precious metal as eternal material value," analysts at Kalita Finance Group told Bigness.ru.

Economists and analysts may argue a lot about the significance of gold in the contemporary financial world, about the decreasing role of this metal and its transformation into a speculative instrument. However, as experience shows, investors tend to go back to gold every time when world markets experience trouble.

This time, the threat of the inflow of additional portion of unsecured dollars from the Federal Reserve triggered active purchases of gold. It is an open secret that the American currency has turned into a new joint measure of cost since the middle of the 20th century and replaced gold in this quality. When US monetary authorities plan quantitative easing measures, many market members question the status of the dollar and turn their heads to the predecessor of the dollar.

"The further dynamics of prices on gold will entirely depend on the actions of the US Federal Reserve. If they pass the new program of quantitative easing in November, the dollar will continue to decline, making market members turn their heads to gold. If so, gold will set more records again," specialists said.