Russia to spend tens of trillions on defense 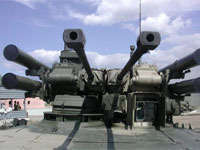 In the next ten years, Russia will spend up to 22.5 trillion rubles on armaments. It was planned that the state program will not exceed 13 trillion rubles. However, the Defense Ministry considered that these funds are insufficient. The new program is designed to bring the share of new technology, adopted in the RF, to 70-80%. Now the number is approximately 10%.

"Total state expenditures on the state armament program will be approximately 22.0-22.5 trillion rubles," Ivanov told journalists following the meeting of the commission on the modernization.

He noted that the main parameters of the state program of armaments for 10 years have been already approved. According to Ivanov, 19 trillion rubles will go to the Ministry of Defense. Approximately 2.5-3 trillion rubles will be allocated for other law enforcement agencies, RIA Novosti reports.

It was planned that the state program of armaments for 2011-2020 will amount to no more than 13 trillion rubles. However, according to the Russian Defense Ministry, these funds could only pay for the development of strategic nuclear forces, air defense and air force. In mid-July of 2010, First Deputy Minister of Defense of Russia Vladimir Popovkin announced an increase in the funding of the state program to 20 trillion rubles. According to Russian Defense Minister Anatoly Serdyukov, "it is minimally sufficient amount" needed to equip the armed forces of the new weapons and military equipment.

The new program is designed to bring the share of new technology, adopted in the RF, to 70-80%. Now the number is approximately 10%. According to Ivanov, one in five rubles will be spent on research and development. He noted that out of a total 22 trillion rubles, at least 20% will be spent on research and development, and primarily applied to create those types of armaments that are needed, in particular, by the Defense Ministry, Internal Troops, or FSB for the next 10 years.

Russian President Dmitry Medvedev talked earlier about the need to change the ratio between the cost of ongoing maintenance of the army and weapons in favor of the latter.

So far we know that state program involves the purchase of ten promising fighters T-50 from 2013 to 2015, and after 2016 - 60 more of such units. In addition, the program will resume production of military transport aircraft An-124 Ruslan, but they will also purchase Il-112 Il-476, Il-76M and the AN-70. By 2015, the Russian Air Force will receive about 400 new and upgraded military transport and assault helicopters, including Mi-28, Ka-52 and Mi-8. For the ground forces, the Army plans to procure modernized military equipment.

Medvedev, speaking at a meeting of the committee, recalled that in recent years budgetary allocation of the defense industry have been constantly growing. In 2009, the industry was given 175 billion rubles to fight the crisis.

Nevertheless, "defense is not yet ready to respond to the growing increase of orders or to finance an adequate increase in production of high-tech products," stated Dmitry Medvedev.

"We would like the money invested to finally be able to stimulate innovation in one of the key sectors of Russian economy, to produce the corresponding cumulative effect," he said.

And yet so far everything goes the other way around, as in case with the most necessary weapon of our time - drones. The Ministry of Defense has spent 5 billion rubles developing and testing unmanned aircrafts. But the project ended in failure. "Last year we tested drones, we gathered all we had in the country, developed a testing program. Not a single drone passed the test, 5 billion rubles were wasted," Popovkin admitted in April.

In November of 2009, Russian Air Force Commander Alexander Zelin said candidly about Russian drones: "Taking them to the arms is just a crime." According to him, Russian drones have satisfied the requirements of the Air Force neither in terms of speed nor elevation, neither in free flight, nor in terms of the resolution ability of the tracking equipment.

For this reason, Russia is forced to buy drones abroad. In particular, in June of 2009, Russia purchased from Israel 12 drones worth $53 million. Later, negotiations began about purchasing another party of drones for $100 million. But what is 12 drones for the country when, for example, the U.S. Army alone used more than 700 drones of various modifications in Iraq? 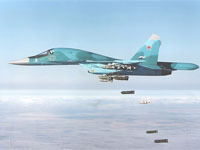 However, last week the media issued reports that further tests for Russian unmanned aerial vehicles (UAVs) all yielded the same results. According to the results of the tests, it was stated that the domestic producers of complexes with UAVs are well advanced in the work of improving their designs. Many interesting developments have been revealed, which, with appropriate refinement, may be adopted accordingly.

Russia has problems not with the drones only. Negotiations to buy the French helicopter Mistral are underway as Russia does not have these technologies. The purchase price would be between 400 million to 500 million Euros.

Meanwhile, as previously noted by Popovkin, Russia would never buy imported components for strategic weapons. The list of items "banned" for sale includes the strategic nuclear forces and strategic defensive forces, Iskander, and precision weapons. Despite the difficulties encountered, Russia is still working on its own military equipment, while in some cases, the Ministry of Defense recognizes the modernization of existing models of weapons would be more appropriate than the development of new.
By the end of the year the modernization of the T-90 is to be completed. Work is underway to increase combat power, to equip night vision devices, the imposition of the crew compartment from the cockpit of the tank and improve the armor. A modernized strategic bomber Tu-160 may soon be replaced by the development of promising new set of long-range aircraft. However, it is not known for how many more trillions of budget money the Defense Ministry will have to apologize.