Director of the Vatican Bank being investigated for money laundering 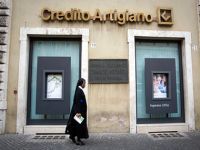 Ettore Gotti Tedeschi, president of the Vatican Bank, known as the Vatican Institute for Religious Works (IOR), is being investigated by Italian courts for alleged money laundering.  By order of Italian justice, the country's tax police seized 23 million euros, which were deposited in an account of the Credito Artigiano Bank S.P.A. (joint-stock company in Italian).

The seizure of 23 million euros was petitioned by a Rome tribunal investigating the omission of the IOR mandatory data concerning the identity of persons performing financial transactions.  The IOR is not directly accused of laundering, but of having omitted the required data.  Ettore Gotti Tedeschi is being investigated for data omissions of the Vatican Bank.

It is suspected by Italian justice that the Vatican Bank manages, through anonymous accounts, identified only with the acronym IOR, large sums in cash of dubious and obscure origin.

This is the first time that an initiative of this nature is executed against the IOR in Italy.  Vatican spokesman, Federico Lombardi, declined to comment on the allegations.

The Vatican Bank, which manages the accounts of various religious orders and Catholic associations, is an institution of the Catholic Church that is not governed by the financial standards in force in Italy.

The Institute was involved in a political and financial scandal in the 80s, for the bankruptcy in 1982 of Banco Ambrosiano, of which the Vatican was a major shareholder for a debt of $3.5 billion and a fiscal hole of 1.4 billion dollars.

The IOR benefits from extraterritoriality since it is located within Vatican City, but the investigation at the request of the Procuracy of Justice of Rome could be opened on the basis of standards adopted in 2007, requiring banks to provide the identity of authors and the nature of transactions.

The penal action was based on data from the Financial Intelligence Unit (FIU) - linked to the Bank of Italy, the Central Bank of the country - which already arranged on the 15th of September the suspension for five days of two transactions considered suspicions, made by IOR into its account at the headquarters of the Roman bank, Credito Artigiano.

The initiative referred to the movement of 20 million euros, destined for the credit institution J.P. Morgan in Frankfurt, and another three million to Banca del Fucino, of Italy. In the account, 28 million euros was deposited next.

The alleged irregularities would be a violation of items 2 and 3 of Article 55 of Legislative Decree 231/2007, which obliges banks to disclose the identities of the subjects of the financial transactions and their objectives and nature.

The involvement of IOR in the investigation is not connected, however, to money laundering.  It is connected to a series of omissions of those persons involved in the transactions and their effects, and are predicted in the legislation against this type of crime.

The amount of $52 million euros was seized by order of Judge Maria Teresa Covatta from a request by prosecutors of Italian Justice, Nello Rossi and Stefano Rocco Fava.

In a circular dated September 9, the Bank of Italy had given the credit institutes statements on relations with the IOR, considered an institution outside the Community, from outside the European Union.