Toyota's trouble gets the double 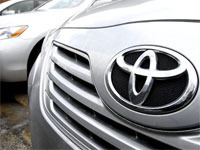 Misfortunes of Japanese automaker Toyota Motor Corp continue. Chinese authorities are threatening to fine the group for bribing dealers. The company, providing cheap loans to three of its dealers, forced them to issue loans to buyers not through the banks of the country, but directly through Toyota. The amount of the fine is 140 thousand Yuan ($20 thousand 650). Damages will amount to 426.3 thousand Yuan ($65 thousand 500).

According to Chinese authorities, a formal decision on penalties will come into force within three working days if Toyota fails to file a request for rehearing on this issue. Meanwhile, the company denies any such allegations and claims that no notification from Beijing on the penalty has been received, The Associated Press reports.

The investigation regarding the financial department of Japanese automotive corporation in China, Toyota Motor Finance (China), was initiated by the Administration for Industry and Commerce of Hangzhou in Zhejiang Province.

According to authorities, in the period from August 2008 to April 2010, the Japanese manufacturer was in collusion with the three dealers who forced customers to take out loans for cars only from the company, not allowing loans from local banks. However, as the Chinese side found out, the annual interest on loans of the Japanese manufacturer is 10-12%, which is significantly higher than those offered by Chinese banks (less than 7%).

As a reward for attracting buyers to the non-advantageous loans, Toyota dealers shared 4.5% of credit earnings with the dealers. In total, Toyota Motor Finance (China) fraudulently earned over 426 thousand Yuan (over $63 thousand).

The agency report stated that the authorities intend to return all illegal income, and fine the company for 140 thousand Yuan ($20.8 thousand). In addition, a similar investigation is conducted in the financial departments of Japanese companies in other cities in China.

This news instantly reflected on the value of Toyota shares. The automaker's shares are currently losing approximately 2.99% in trading in Tokyo.

Toyota's bad luck started last year, when it recalled 3.8 million Lexus cars (model ES 350, IS 250 and IS 350) and Toyota (Camry, Avalon, Prius, Tacoma, Tundra) in the U.S. due to the fact that sliding mat blocked the gas pedal.

In late January, Toyota announced that the gas pedal may stick in 2.3 million cars, and no longer because of the mats. At this time, the cause was a defective accelerator drive, which eventually becomes difficult to push; it rotates slowly to its original position or, at worst, gets stuck in the pushed down position. As a result, the list of recallable models included three models from the last recall (Avalon, Camry and Tundra) and five new models - Toyota RAV4, Corolla, Matrix, Highlander and Sequoia.

Accelerator drive is not the only problem with Toyota. In November, the company recalled 110 thousand Tundra pickups in the United States because of a possible malfunction of spare wheels mounting. In July, the automaker announced the recall of 71 thousand cars because of malfunction in the transmission. In August of this year, Toyota announced a recall of over 95 thousand cars of the three models in the U.S. due to a possible failure of the braking system.

The total number of vehicles recalled by Toyota Motor in the U.S. and European markets due to defects in the gas pedal is nearly 9 million cars. This figure exceeds the annual sales in recent years, which in 2009 totaled 7.81 million, and in 2008 - 8.97 million vehicles.

In this case, the story of the massive recall is ongoing. Recently, Japanese engineers group said they found a fault in the "black boxes" of the cars suspected of spontaneous acceleration.

During the tests of "defective" vehicles Toyota engineers suspected that a device that records the speed of cars was not working properly. For example, the "black box" of one of the crashed pickup Tundra recorded the speed of 274 km / h, which, according to the Japanese, is not physically possible. The observed failure of the program means that not all Toyota cars that have been recalled really spontaneously accelerated.

The latest model recalled by the Japanese company is Pickup Hilux, totaling over 116,000 units. Reason for the recall is towing lugs, which periodically break down, especially on roads with frequent alternates between braking and acceleration.

It is worth noting that the automaker's losses are not limited with repair expenses. In March of 2010, Ministry of Transport of the United States demanded that the leadership of Toyota submits for review all documents relating to the mass recall of cars in the United States to see how quickly the company responded to the identified defects in their vehicles.

As a result, the Ministry of Transport found that Toyota knew about the gas pedal issue no later than September 29, 2009, and alerted the European consumers about the possible problems. However, in the U.S., the company announced the recall of vehicles only in January of 2010. Thus, the company delayed providing this information to the authorities for over four months.

In early April of 2010, the U.S. federal government has imposed penalties in the amount of $16,347,000 on the Japanese automaker Toyota Motor Corp for the fact that it delayed the official announcement of the problems associated with a defect of the accelerator pedal in the US. This is the maximum possible amount of penalty in the U.S. and the highest sanctions ever applied by the Government to automakers.

However, the Japanese automaker does not despair. By the end of 2012, Toyota plans to launch six new hybrid cars and electric cars, which will initially be available only in the North American market.

Earlier, Toyota lagged behind competitors such as Nissan Motor Co and General Motors Co in the number of electric and hybrid models. However, the new plans of the company show that the largest automaker plans to win back the backlog, which was partially caused by the recall of cars due to safety concerns.

Toyota Motor is one of the world's largest automakers. Moscow office of Toyota Motor was established in 1998. Net profit of the group in the first quarter of 2010-2011 fiscal year amounted to 190.47 billion yen (2.21 billion dollars) against losses of 77.82 billion yen a year earlier.