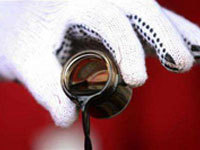 Khalid al-Falih, CEO of Saudi Aramco, a state-run oil enterprise of Saudi Arabia, said at the 21st World Energy Conference in Montreal that his nation's oil reserves would be enough for at least 80 years, taking account of the current development of the oil industry.

The official added that there would be more crude extracted because Saudi Arabia was increasing the output level for its oil fields from 40 to 70 percent, RIA Novosti reports.

Falih, the head of the world's largest state-run oil company, believes that the world consumption of oil as the basic energy carrier would only be growing  despite the concerns of the international community with such issues as the global warning and the atmospheric pollution. The consumption, the official said, would be growing to satisfy the needs of developing states.

Khalid al-Falih also said that about three billion people on the planet would start receiving the income of 10-30 thousand dollars a year. Such a development of the situation will create previously unseen demand on energy, he added.

Experts of the International Energy Agency said at the end of August that the developing economies had drastically changed the long-term model of the global oil consumption. This year, the demand on oil in the second quarter turned out to be higher than during the traditional peak winter season in the Northern hemisphere. The classic peculiarity of seasonal fluctuations usually implies price growth on oil in winter in the Northern hemisphere and declining demand on fuel during warm seasons.

The character of seasonal fluctuations changes against the background of the growing demand on oil in such countries as China, India, Saudi Arabia, Brazil and Indonesia. This trend is only going to get stronger, experts of the International Energy Agency believe. Therefore, experts expect new problems with refinery capacities and logistics.