Where are the jobs? 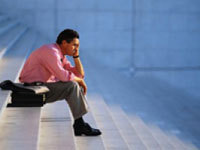 Most Americans don't really care about the economic minutiae that many of us who study the U.S. economy love to pour over. When it comes to the economy, the typical American citizen just wants to be able to get a good job, make a decent living and put bread on the table for the family. For generations, this arrangement has worked out quite well. The U.S. economy has provided large numbers of middle class jobs and the American people have worked hard and have helped this nation prosper like no other. But now people are starting to notice that something has shifted. Millions of people are looking around and are realizing that the jobs that are supposed to be there are not there anymore.

The American people are still working hard (and in many cases harder than ever) but all of that hard work is producing fewer and fewer rewards. Often politicians will placate voters by telling them that they are working harder and harder for less and less. That tends to ring true with voters because that is a very accurate description of what so many of them are actually experiencing, but what the politicians don't tell us is that they are the ones to blame for the situation that we are in. As millions of jobs become obsolete because of technology and millions of other jobs are shipped overseas, our politicians tell us over and over that we can "compete" with anyone and that if we will just go out and get some more education we can make it happen. But those of us who are extremely over-educated know what a fraud that line is. The truth is that there are not nearly enough jobs for all of us no matter how "educated" we are. This is creating a lot of anger and frustration, and now even the IMF is warning that we could see "an explosion of social unrest" if high unemployment persists.

But what can be done? You can't force large corporations to hire people. The reality is that there are a couple of huge factors that have brought us to this point. First of all, advanced technology means that big corporations need fewer people to do the same amount of work now. Secondly, the globalization of our economy means that U.S. workers have now been merged into a global labor pool where they are in direct competition with workers who are more than happy to make less than a dollar an hour on the other side of the world.

This all means that the labor of American workers is less valuable to global corporations than it ever has been before. Advanced technology and computers have enabled corporations to operate leaner and meaner. If they do need some old-fashioned muscle for certain tasks they can always run out and set up a facility in some third world nation where they can pay people close to slave labor wages and where they don't have to worry much about taxes, regulations, unions, health benefits or pension plans.

What did you think was going to happen when the United States entered into all of these "free trade" agreements with nations around the world that did not have minimum wage laws?

U.S. corporations are not in existence to provide the American people with jobs. They are in existence to make money. If they can make more money by shipping jobs overseas, then that is exactly what they are going to do.

According to Tax Notes, between 1999 and 2008 employment at the foreign affiliates of U.S. parent companies skyrocketed 30 percent to 10.1 million. During that same time period, U.S. employment at American multinational corporations declined 8 percent to 21.1 million.

Are you starting to see the picture?

Global corporations based in the U.S. have been creating lots of jobs - just not in the United States.

In fact, things only seem to be accelerating.

In the old days, you could give tax breaks to U.S. firms and that would spur them to do more business and to hire more workers. But today, if U.S. multinationals decide they wish to expand they will just go hire more third world workers and pocket the rest of the profits for themselves.

This has created a growing subclass of people in the United States who feel that the system has failed them. The anger and the frustration in the country is rising every day. You can almost feel it.

In fact, the IMF is warning that we are at risk of "an explosion of social unrest" due to this unemployment crisis.

The head of the IMF, Dominique Strauss-Kahn, recently made the following statement at an Oslo jobs summit with the International Labour Federation....

"The labour market is in dire straits. The Great Recession has left behind a waste land of unemployment."

So exactly what is going to turn that around?

Are millions of jobs going to suddenly hop up and return home from overseas?

Is the U.S. trade deficit crisis suddenly going to reverse and turn into huge trade surpluses for the United States?

Of course none of those things is going to happen.

Plus, if the American people don't have good jobs, they can't buy homes. In fact, a growing number of Americans are finding out that they can't even afford the homes they are in right now. CNBC is reporting that the nation's banks repossessed a record number of homes in August.

But for many Americans, a foreclosure is just the beginning of their problems. People are falling out of the middle class at an alarming rate. Approximately 45 million Americans were living in poverty during 2009. That is an absolutely astounding figure.

So what is going to happen when (not if) things get even worse?

Well, some investors are already anticipating rough times ahead and are flocking to commodities. The price of gold soared to a record intra-day high of $1,276.50 an ounce on Tuesday, and the price of gold and other commodities will probably continue to climb as economies around the world continue to destabilize.

Just hope that you don't end up being one of them.