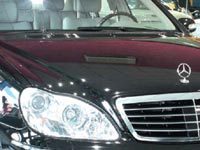 Luxury has survived the crisis, experts say. The death of luxury brands market is postponed indefinitely, and the survivors recovered faster than the more modest brands. Over seven months, the growth in retail turnover, according to Rosstat, was up 4%, and the Russian luxury market can be expected to grow by 5-10% already this year.

Last year, a noticeable drop in sales occurred in the highest price segments: cars, watches, jewelry. According to the consulting and research firm Bain&Company, in 2008 the worldwide market for luxury goods amounted to about €175 billion, and in 2009 it declined by 12%, to €153 billion. At the same time, the Russian market has sunk, according to experts, by 15-40%. However, the situation has changed.

The absence of crisis with free financial resources and willingness to spend among consumers of luxury brands showed at the Moscow Motor Show, where the most expensive premiere of the exhibition were sold out several days before the closing of the exhibition. The Russians swept all Porsche 911 GT RS and Bentley Mulsanne, allotted before 2012.

According to Vagif Bikulov, head of Bentley in Russia, the most expensive car in the history of the car brand was sold out in just a few hours. Even before the official sale, all Mulsanne have already found their owners. Now Russia is negotiating with Bentley dealer to increase quotas on some models, since there are no cars left in showrooms.

In general, the growth of Bentley car sales in Russia in the first 6 months of 2010 amounted to more than 35% compared to the same period of last year. The growth could be higher, according to specialists, if it was not for the lack of cars in Moscow.

Sales of jewelry also show positive dynamics. According to the Russian Statistics Agency, in the first quarter of this year jewelry sales increased by 12% in nominal terms. The index, expressed in comparable prices, is still below the statistics of the comparable period in 2009.

It was suggested to include "luxury items, consumption of which testifies to wealth of their owners" in the number of taxable items with graded rate of 1 to 5%. The scale should be applied to high-end housing, villas and plots of land worth 15 million rubles, cars, planes, helicopters, yachts, boats that cost 2 million rubles and more, as well as precious metals, precious stones, paintings and sculptures worth 300 thousand rubles and higher.

The bill was considered in the first reading. Three factions spoke in favor of its adoption - the Communist Party, Fair Russia and the LDPR, a total of 115 deputies (with a required minimum of 226).

In June, the Ministry of Economic Development put forward a proposal to introduce the excise tax on luxury in Russia as a source of stable replenishment of the budget. Proposed excise goods include jewelry, energy inefficient products and even chocolate.