Elena Baturina, a Russian entrepreneur and the wife of Moscow mayor Yuri Luzhkov, has been listed among three richest women in the world according to Forbes magazine, RIA Novosti reports. 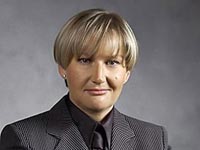 The list is topped by Wu Yajun of China, who made her $3.9 billion on real estate business. The second position is taken by Rosalia Mera, a co-founder of Zara clothing company with $3.5 billion.

No.3 belongs to Elena Baturina of Russia. The Russian business lady has left behind such world-known personas as Oprah Winfrey with her $2.4 billion, Doris Fisher, the owner of Gap, Old Navy and Banana Republic empire, Giuliana Benetton, the owner of Benetton brand with $2.1 billion and world’s richest female writer J.K. Rowling, who made over $1 billion on her world famous Harry Potter novels.

Baturina’s fortune was evaluated at $2.9 billion. She started her career as a worker at a factory and then founded her own companies – Inteko and Patriot. Baturina comes third on the list of only 14 women who earned billion-dollar fortunes. Forbes’s club of billionaires counts 1,011 billionaires in total.

Nearly a half of Forbes’s list of self-made women is represented by Asian business ladies, presumably Chinese women. For the time being, only one lady has decided to express her ambitions in politics – Meg Whitman – a candidate for Arnold Schwarzenegger’s position as the governor of California. She has already spent $70 million of her $1.3-billion fortune on her election campaign.