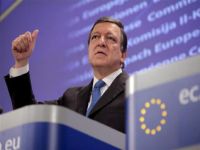 Morocco bans European Parliamentarians from visit to the territory

To this additional arbitrariness and disrespect of EU representatives, who will tell Barroso and the Commissioner for Fisheries, María Damanaki?

Morocco has prohibited the visit of a group of European deputies to Western Sahara with a view to ascertaining whether the EU fishing agreement with that North African country is legal and is benefiting the country, said Parliament today.

The Moroccan authorities have sent a letter this week to nine European deputies in the Committee of Fisheries of the European Parliament (EP), who were prohibited from making their trip to the Saharawi territories.

The objective of the visit was to verify the implementation of the fisheries agreement that the EU has with Morocco and check on the spot whether it is benefiting the Saharawi population, as declared by the Spaniard, Raul Romeva (ICV-Green), and the Swede, Isabella Lovin (Greens), two of the deputies who were part of the delegation.

Morocco argued that "now is not a good time for the visit to be conducted appropriately," but the European deputies regret that the Moroccan government does not allow representatives of the institution to verify for themselves the state of fisheries in the Sahara.

Raul Romeva told the Spanish agency EFE that the attitude of Morocco "is not new," as European deputies are already accustomed to these prohibitions and to the first Rabat says yes, shortly afterwards, when approaching the date of travel, "the door is closed."

It is remembered that the legal opinion of the European Parliament, maintained for years in "strange secrecy," found that the agreement between the EU and Morocco does not respect international law by not adequately benefiting the Saharawi population.

The lawyers questioned the legality of the agreement, because in spite of EU fleets exploiting the fish resources of the Sahara, the Saharawi people were not only not consulted on it, as in they also benefit nothing from the economic endowment that Rabat receives annually from the community budget.

European deputy, Raul Romeva, said members of the Commission of Fisheries and Development of the EP will have several meetings on this matter and stated that when negotiations begin for renewal of the agreement in late 2010 and early 2011, "is not certain that the agreement will be underwritten with the same conditions as the current one, especially namely regarding the inclusion of the waters of the Sahara."

Romeva stressed that in Parliament there is an ever a greater number of members, eurodeputies of other groups such as the Socialists or the Popular, who believe that the fisheries agreement is not only economical, but that it contains a strong political component, and the problem of the Sahara is "serious."

The Fisheries Agreement between the EU and Morocco grants licenses to 119 community boats, a hundred of which are Spanish.

In contrast, the EU pays an annual compensation of 36.1 million euros to Morocco. According to the Western Sahara Resource Watch (WSRW) - an NGO that monitors and condemns the illegal exploitation of natural resources of the former Spanish colony occupied by Morocco since 1975 - the journey of European deputies seemed an "excellent opportunity to demonstrate whether the Saharawi population benefits from the agreement, as the European Commission (EC) argues."

It is recalled that the EC asked Rabat for more information on the socio-economic impact of the agreement on the populations of Western Sahara and the information they were to receive will influence the decisions of Brussels in time to renew the arrangement. Up to now Morocco has handed over nothing.

Information based on order of EFE and Communiqué WSRW

THE UNDERSIGNED PROTEST AGAINST EU'S FISHING IN WESTERN SAHARA!