Russia has been traditionally positioning itself as the prime source of hydrocarbon raw materials for Western Europe. However, European countries also have crude reserves, although they are not enough to cover the current level of oil consumption on the continent. Europe receives most of its oil from the North Sea, where Norway and Britain set their rules. 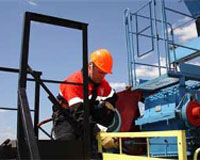 The oil extracted in the North Sea - 100 million tons a year - is only enough for Norway (world’s third largest oil exporter) and Britain, which buys that oil. The level of oil extraction in the region has been decreasing recently, but oil companies continue to discover new small deposits of black gold in the North Sea.

Norway’s oil company Det norske has recently found one, The Norway Post wrote. The deposit has from seven to twelve million barrels. Nothing has been reported about the profitability of extraction in the new deposit. The North Sea still remains the territory of good perspectives, not to mention the Arctic region, which has not been explored yet.

The largest oil wells on the British continental shelf in the Northern Sea are Leman-Bank, Brent, Markham and Buzzard. The proven reserves are evaluated at 3481 million tons. As for continental fields, the largest one is Wytch Farm – about 60 million tons of oil, Neftegaz.ru website said.

Britain ’s long-time adversary in the field of oil mining, France, is no competition. However, France was the first nation to have applied the method of oil mining at Pechelbronn. France was also the first to start the industrial extraction of this fuel.

Nowadays, France mines only 20,000 barrels of oil daily. This number pales in comparison with the nation’s needs of nearly 2 million barrels a day. The explored oil reserves in France are not that large either – 122 million tons.

The situation with oil in Italy is much better, though. The annual volume of extraction varies between 4-6 million tons. The proven reserves of black gold in Italy are evaluated at 85 million tons. They are concentrated on the oil fields of Trecate, Monte-Alpi, Ragusa and also on the continental shelf – Rospo-Mare, Akila, Gela. The Italians extract heavy oil at sea, and the exhausted reserves made the further production unprofitable. The Italians do not panic since they have oil…to Spain’s jealousy.

The explored oil reserves in Spain make up 1 million tons. Spanish oil companies operate in the Mediterranean Sea where its major oil field – Casablanca – is located. The oil output has been decreasing steadily and hardly reaches one percent of the nation’s needs. This aspect probably explains Spain’s sponsorship of various alternative energy projects.

Germany is one of the richest European nations in terms of oil reserves. Germany has approximately 560 million tons of oil. In 2009, the nation extracted 3.5 million tons. Germany will not suffer from the lack of fuel, although the oil production process in the nation is highly complicated.

Austria, another German-speaking country, is a true continental oil giant. The Austrian oil is the cheapest in Europe, although the reserves are not that large – 95 million tons. Austria does not wish to develop the national oil industry. This country is known for something completely different: green Alpine meadows, clear mountain air and tourism.