Hugo Chavez, the President of Venezuela, has called for the institutionalisation of the Latin American Common Market, UNASUR and has warned that its twelve member states should remember the commitments they made to Haiti. 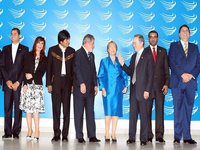 In his Sunday column, President Hugo Chavez hailed the election of Nestor Kirchner (ex-Argentinean President and husband of its current President, Cristina Kirchner) as the first Secretary-General of UNASUR, at the Summit on May 4 and called for its additional strengthening and implementation.

For Chavez, Nestor Kirchner is a member of the generation of Latin American leaders who embody a change of season. Welcoming the opportunity for introspection among the 12 member states (Argentina, Bolivia, Brazil, Chile, Columbia, Ecuador, Guyana, Paraguay, Peru, Surinam, Uruguay, Venezuela; Panama and Mexico have observer status) Hugo Chavez established a deadline of two weeks for UNASUR to fulfil its commitment to provide the 100 million USD in funds for the rebuilding of Haiti.

Hugo Chavez reminded his colleagues that UNASUR had pledged to provide 200 million USD in reconstruction aid and that they had committed themselves to provide 80 million USD of this by the end of March 2010. This did not materialise.

He also praised the unanimous stance taken by these nations in condemning the racist law in Arizona, USA, which criminalizes immigrants, which he described as “a real and true attack on human rights”.

Recalling also that the Summit of UNASUR expressed support for Argentina in its exercise of sovereignty over the Malvinas/Falklands Islands and the facilitation provided for the Paraguayan President Fernando Lugo to fight criminal violence in 5 States of his country, Hugo Chavez concluded that the Union of Latin American nations is very much strengthened as the 12 member states start to take steps together.