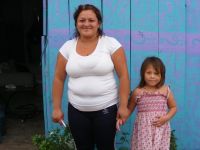 Indispensable for the functioning of tourism in Mexican resort, hundreds of thousands of people live and work in poor conditions and suffer racial discrimination

The blue waters of Cancun, a city known as the "Pearl of the Caribbean" permeates the dreams of tourists worldwide. Main destination of Mexico, the city has about 700,000 residents and receives more than three million tourists each year - the vast majority from the United States, followed by Canadian and Spanish.

Tourists are like the American Beverly Alston, from New Jersey, who comes every year with her family to stay in luxurious resorts in the region. "We love Mexico. We will come back more often," she said aboard a cruise accompanied by her daughter and husband.

Until the 1970s, Cancun was merely a fishing village with about two thousand inhabitants. Betting on the potential of international tourism (70% of the tourists are foreigners), the government implemented an urban-oriented luxury tourism.

Having opened up broad avenues, following the U.S. model, they made room for hotel chains - first the original plan was to build no more than 200, offering about 17,000 rooms. Today, there are more than 32,000 hotel rooms in Cancun, according to City Hall.

"This is the Little Miami," jokes the activist Alejandro Eguia Liz, director of the NGO Tzol K'in, who works with Mexicans who suffer from the impacts of tourism. He points to the hotel area: a 17 km range that borders the beach with hotels like Mariott and Hilton, and resorts like Casa de los Sueños Resort ", "Crown Paradise" and "Moon Palace," whose daily values may reach up to five thousand dollars. The hotel area also offers bars enshrined in the U.S., such as Hard Rock Cafe and Hooters, nightclubs and luxury shops like Armani, Cartier and Dolce & Gabanna.

According to the National Institute of Statistics and Geography of Mexico, 67% of tourists who arrived in the region in 2008 stayed in five star hotels and another 14% in four-star hotels.

"We live very far from God and very close to the U.S.," jokes Alejandro with a citation of Mexican dictator Porfirio Diaz, explaining that the inhabitants have no access to city beaches. "Each hotel has its own strip of sand with bar and restaurant. The entries required by law, are difficult to reach."

Mason Daniel Paz Gomez, 27, says that while working building hotels on the beach, he rarely visits the shore. "If we enter, the guards come after us," he says, which is inside the region of Chiapas in the south.

Cancún is a city of migrants like Daniel. Lured by the promise of better pay and tips in dollars, people from various places have helped shape the most rapid internal migration in Mexico. It is estimated that no fewer than 50 native languages are spoken in the city. Until today, Cancun has boasted of some of the highest rates of urban growth in the country - 9% per year, according to city hall.

But this diversity is hidden by the hotels, according to Alejandro, who, before turning to the third sector, he worked as a trainer of teams in the chains. "The workers cannot speak Spanish among themselves, imagine their native languages."

Strolling along the beach, Canadian tourists and Alana Donny Smith confirm that they didn't have to speak a single word in Spanish since they arrived. "The staff always strives to speak English," says Donny.

But for the suitcase porter Ek Arturo Rodriguez, the biggest problem is the prejudice against natives, who inhabited the region since pre-Columbian times. "I had to look at many hotels before getting this job," he says. "They told me several times that I didn't have the appropriate height and that he had no profile. "I needed to have whiter skin and a more European biotype," he explains.

"Employees are taught to be subservient and never complain," says Alejandro Eiguer. A physical therapist who declined to be identified told the story to Opera Mundi that she wasfired from the resort where she worked for trying to organize fellow workers to demand better conditions. The unionist Salvador Trinidad Reyes, leader of the Revolutionary Federation of Workers and Employees, says many are afraid to join unions. "The pressure is very strong because managers say there are many others like you that want the job," he says.

According to him, one of the big problems is the frequent use of temporary contracts of 28 days which, in practice, withdraws any rights of the worker. He said most of the workers like builders, janitors and plumbers work on these contracts, renewed countless times. "In the case of the gastronomic sector, the hotels often hire subcontractors who do not pay social security and change the employee of the hotel, to avoid any lasting relationship with colleagues and bosses," he says.

Another problem is reported by immigrant Rubí Argaez, who lives in one of 300 slums that spread on the outskirts of Cancun - almost always hidden behind grand boulevards and vacant lots. "Icame with my two daughters looking for a better life, but the dream did not take place," she says. She said the work was exhausting too because hotels often had to perform double or triple journeys without being able to return home, nor complain. "I was afraid to leave the girls alone."

The slum Maracuya Cologne, where Rubí lives, is about 20 minutes from the hotel zone - but seems a world apart. Situated behind a huge department store at the north end of town, the slum houses about 200 people in precarious wooden houses, without an official supply of electricity, water or sewer.

Rubí, who earns some money doing other odd jobs in the construction industry or as a nanny, says she had great difficulty with getting her daughters admitted to a public school. "They do not accept my statement that I live here in Cologne, since I do not have an official receipt, "she says.

The global crisis has come to Cancun in a violent way. In 2008, unemployment rose from 3% to 8%. Besides the impact on the economy because of the economic dependence on the United States - which led the Mexican GDP to a drop of 6.5% in 2009 - the swine flu kept away more tourists, leaving thousands of hotel rooms unoccupied. Those most affected were the workers in the industry.

In the city of Playa del Carmen, on a beach next to the bustling street Benito Juárez, dozens of construction workers are sitting since six in the morning waiting for a prospective employer that offers at least one working day. Many carry backpacks with tools. Typically, payment is 150 pesos (about 20 dollars), but in recent years conditions have been getting worse.

"There is little work now," says Joseph Mason Louis Bolaños. Born in the interior, but living in Cancun for eight years, he commented that many employers do not pay the money due. "This guy here is not reliable," he explains, pointing to a man who parks a van on the side of the square and then is surrounded by a dozen candidates for a job. "I worked with them a week and then he disappeared. I ran out of money."

To soften the impact of the crisis, one of the strategies used by travel agencies and hotel chains in the Mexican resort of Cancun has been betting more on packages with an all inclusive price. The visitor pays far less for the flight, including all meals, accommodations and entertainment at the hotel. Within the resorts, there are restaurants, nightclubs, massage clinics, game room and exclusive shows for guests.

"They seem like real mini-cities," says Astrid Cavazos, manager of the Port Royal hotel. She admits that local merchants cannot compete, since the prices offered by the packages are much lower.

The merchant Rubén Cahan, who owns a little souvenir gift shop in the eight blocks of resorts of Playa del Carmen, says that many tourists do not even leave the hotel, which has a serious impact on business. "It is increasingly difficult," he says. "Some tourists say that the native shops are very far away."