The continuing oil leakage is lurking and growing in enormous proportions offshore in a swelling, churning slick of dense, rust-colored oil which can be described in terms of size as comparable to that of Puerto Rico. It extends from the salt marshes of Louisiana to the sandy beaches of Florida. There is uncertainty and fear over not only how the catastrophic accident got to this point, but what might happen in the coming days, weeks and months. 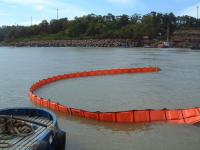 The oil slick is now 80 miles from the coast of Florida, threatening to decimate all beaches on the Gulf Coast and perhaps even spread up the eastern seaboard of the U.S. Each day, over 200,000 gallons of oil pour into the Gulf waters. The southerly water currents so far have kept the spill in the general Louisiana area, but are expected to reach the area of Pensacola, Florida on Thursday.

Once the slick gets picked up by the Gulf Loop Current, all bets are off about containing the slick. The Gulf Loop Current looks similar to a "conveyor belt," sweeping around the Gulf, through the Keys and right up the East Coast of the United States.

Americans are being warned that they will be affected with increased prices for gas and seafood. Odd how incompetence, profiteering, accidents and disasters are always automatically tranferred to the people who can least afford to pay for it while those who caused the loss only get richer and fatter, passing on all expenses to the hapless consumer. In turn, who does the consumer pass his costs on to? It makes no sense at all unless one is a diehard believer in dog-eat-dog capitalism.

One of the tactics being used in order to spare wildlife is to prevent the oil from reaching the surface of the water. Chemicals are added to the oil that cause it to sink to the bottom. However, this ends up affecting the fish and other sea creatures in the water from this noxious mix.

Many booms that were deployed by fishmen have been found washed in on shores and beaches. Even one knot of current will cause the slick to go over the boom, thus defeating its purpose.

President Obama visited the Gulf Coast Sunday to personally observe the results of the oil spill as administration officials defended their response to what could be the nation's worst offshore spill in at least 21 years or perhaps in its entire history. It took five hours by plane, motorcade and helicopter to reach Venice, Louisiana. A briefing was held at a Coast Guard command center, and the President spoke to five fishermen and got an aerial view of the coastline.

Speaking in driving rain, Obama called it a "massive and potentially unprecedented environmental disaster" that could take many days to stop. He said the priorities are to plug the spill and protect the estuaries.

The type of oil pouring out from this spill is lighter than the heavy crude spilled by the Exxon Valdez, evaporates more quickly and is easier to burn. It appears to respond to the use of dispersants. The oil is still capable of significant damage, however, and can travel long distances in the right conditions. The Gulf has been resilient to previous assaults, but even then there is a limit to what it can withstand. Much damage can be avoided if the various tactics employed by BP and government technicians pay off in the coming days.

The winds are dying down and the seas are calming, allowing for renewed skimming operations and possible new controlled burns of oil on the surface. However, oceanographers are now saying the Gulf oil spill could get into the Gulf Loop Current within 24 hours, eventually carrying oil south along the Florida coast and into the Florida Keys. Once the oil enters the Loop Current, it likely will end up in the Keys and continue east into the Gulf Stream, and could affect Florida's beaches, coral reefs, fisheries and ecosystem within a week.