If Greece does not receive financial aid by May 19, the country will become a bankrupt, the government warns. By that date Greece must pay off 9 billion Euros. Last week the country asked the International Monetary Fund for support. The decision regarding funds allocation will be made based on the results of three-way negotiations between the Greek government, European Committee and the IMF. 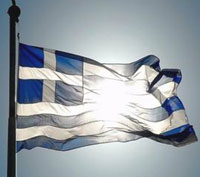 Greece's Finance Minister George Papaconstantinou gave this warning on Monday, April 26, in his address to the country’s parliament. He added that under current conditions of the financial market his country was not able to obtain the required amount by the deadline.

Russia Today: UK is not in Greece's situation, but not far enought for comfort

At the end of last week the Greek government asked the European Council and IMF to allocate €45 billion, a part of which would be spent for current loan payments. Supposedly, €30 billion will come from the European Union, with €8.4 billion coming from Germany, and another €15 billion from IMF.

Athens’s external debt is estimated at €300 billion, and the budget deficit of last year was revised from 12.7 to 13.6% of GDP. Therefore, despite the wining of the Greek Financial Minister, German chancellor Angela Merkel and Papaconstantinou’s German counterpart Wolfgang Schäuble stated in Berlin that the decision regarding aid to Greece will be made only after the negotiations between the European Committee, IMF and Athens are over.

Interestingly enough, Greek people are against the aid from the EU and IMF, despite the government’s panic over possible insolvency.

According to Reuters that refers to the results of the poll conducted by Greek Public Opinion institute, 60.9% of the country’s population expressed their disapproval of further borrowing. 70.2% of them are absolutely against IMF participation in the financing. The respondents of Greek Public Opinion explain that they are concerned that they would have to pay for this aid by even more rigid savings.

While trying to talk the EU into helping, the Greek government has already reduced salaries in the government sector and increased taxes. Earlier they undertook to reduce the budget deficit to 8.7%, and by the end of 2012 to 3%, or even less.

These concerns are justified. Germany, as the largest Greek lender, has already showed Athens that it was not particularly happy with the way Greece was trying to reduce government expenses. They need to tighten their belts even more, and then the aid may come. Angela Merkel stated that Germany was ready to provide aid, but only under the condition that all preliminary conditions will be met.

The Chancellor meant the IMF 3-year program designed specifically for Greece. She said that only if the program is implemented there would be a chance to provide long-term stability of Euro, and Greece had to make its contribution.

The parliamentary floor leader of Merkel's Christian Democrats party Volker Kauder told German television that the coalition government would back the Greek aid measures, but only because the stability of the euro is at stake. He also said that Greece must prove it is pushing ahead with its budget deficit cuts before Germany would hand over aid.

Meanwhile, the opposition represented by Social-Democrats in Bundestag stated that they were going to block the decision about aid.

European Central Bank stated that the crisis in Greece will not affect the entire EU. Evald Novotny, central bank governor, said that there were no economic signs indicating spreading of the disease.

The majority of financial analysts have a different opinion. Bloomberg quotes Kenneth Rogoff with IMF who thinks that Ireland, Spain and Portugal are also in a very vulnerable position.