Nanotechnology: On The Road To A High-Tech Russia

Russia has set up the first company to apply nanotechnology commercially. The move was announced yesterday by Anatoly Chubais, CEO of Rosnano and the Deputy Prime Minister, Sergey Ivanov. The first items coming from this world-class project will be nano-coated carbide tools to be used in machine-building industries. 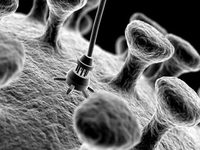 Nanotechnology: On The Road To A High-Tech Russia

Nanotechnology, or “nanotech” (from the Greek Nanos = dwarf) deals with the study of matter on atomic and molecular scales, namely 100 nanometers (one billionth of a meter) or smaller and creating devices or materials of that size. The applications are vast, ranging from the development of new materials and compounds, extensions to device physics, from the application of molecular self-assembly to control mechanisms over atomic matter. The immediate impact of this research creates new approaches for the area of medicine (for instance, targeting growths), wider implications for the electronics industry (silicon products) and fresh options for energy production (photovoltaic cells).

The new plant will be opened in Rybinsk, region of Yaroslavl. It will be managed by New Instrumental Solutions and the capital will belong to Rosnano (49.8%), Saturn and Gazprombank (25.1% each). For Anatoly Chubais, “ From a technical standpoint, the project meets world level. This technology, due to its effectiveness and technical level, will be able to solve problems not only for metal cutting tools but also for other types of products”.

Promising to develop a business model which is competitive with the leading world brands, Chubais explains that the company’s output is expected to reach 150,000 units by 2014 (full capacity), worth 1.275 billion Roubles (40 million USD) in sales. The investment, according to the Yaroslavl regional government, is of one billion Roubles (32.5 million USD).

On the road to a high-tech Russia

Other areas in which Rosnano is involved:

The production of LED light bulbs, which are based on the emission of diodes and guarantee a long life-span. The plant is set up near Saint Petersburg and Russia intends to phase out the incandescent light-bulb completely by 2014;

The development of antioxidant medicines which act against ageing through the employment of biologically active ions. Tests on laboratory animals have revealed dramatic successes in longevity rates;

In Irkutsk, Rosnano is boosting its production of silicon;

A plant at Chuvashia, on the Upper Volga, produces photovoltaic cells.

Rosnano intends to have over 100 production units open by 2015 and is actively engaged in more than sixty projects of research and development.