The Russian President, Dmitri Medvedev, defended in Brasilia that the political strength of BRIC (the group of countries formed by Brazil, Russia, India and China) can be used not only for discussions of trade agreements, but to combat terrorism practices, drug trafficking and organized crime. 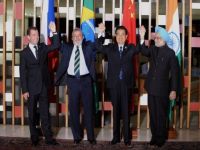 The proposal of the Russian President, who gave no details of how BRIC could perform in these cases, occurs after the double suicide bombing in late March, when two female suicide bombers killed 38 people in the Moscow metro.

With respect to the global crisis, like other heads of state and government who argued proposals in Brasilia for a more balanced multilateral system, Medvedev said the nations that comprise BRIC should seek balance and fairness in the international system, guaranteeing a specific output even for nations affected by global financial crisis.

"One of the most important issues discussed today in overcoming the economic crisis is the creation of a fairer and more egalitarian international system . All our discussions reflected a consensus regarding this issue," said the Russian president.

While Brazil, Russia, China and India do not form a political bloc or a formal trade alliance, BRIC has signed since 2002 a series of trade and cooperation agreements to boost its economic growth. Together, the four nations accounted for 15% of gross domestic product (GDP).

In a joint statement, the presidents of Brazil, Luiz Inacio Lula da Silva of China, Hu Jintao, Russia, Dmitri Medvedev, and India, Manmoahn Singh, defended the reform of the United Nations (UN). Experts from the four countries that form BRIC (economic bloc of emergent countries) also met in Brasilia during the 2nd Summit of BRIC.

In a statement, the leaders of the four countries said that the UN represents a central role in dealing with change and global threats. Precisely for this reason, the statement said, it is necessary to reform the UN so that the organization is more efficient, effective and representative.

On the global financial crisis, the joint statement of BRIC also asked that the G-20 (Group of 20 largest economies in the world) have a more proactive stance and formulate a coherent strategy for the post-crisis period.

The presidents of the BRIC countries also say that despite signs of improvement in the global economy, much still needs to be done and argue that the world needs a more stable financial architecture, so that the global economy is more resistant to future crises.

Fighting hunger - as a way of combating poverty and hunger worldwide, the BRIC countries in a joint statement stressed that nations set out to create a storage system for agricultural data as the basis for a strategy of offering food to vulnerable populations. The same proposed policies would help to reduce global warming and still allow the development of innovative technologies in the field of agriculture.

"We call on the international community to make every effort to address poverty, social exclusion and inequality," says the document, which also notes the importance of adopting strategies for renewable energy, with "cleaner and more sustainable energy systems."

The meeting of heads of state of BRIC, in Brasilia, had as the central themes the global economic crisis and aid to poor countries, and was also marked by the meeting of experts from the countries to present and discuss the experiences between Brazil and Argentina to trade in local currency. BRIC is an informal economic bloc and not a trade association, such as Mercosur or the European Union.

The term BRIC was established in 2001 by the American economist, Jim O'Neil, to refer to the group of developing countries with common characteristics and, according to projections, will present the highest rates of growth over the next 40 years.

Among these characteristics are a stable political situation, manpower in the qualification process, recently stabilized economy, and good reserves of mineral resources. Production levels and export growth, the increase of Gross Domestic Product (GDP) and the reduction of social inequalities are also part of the characteristics.

According to O'Neil, the Gross Domestic Product (GDP) of Brazil is to double one and a half by 2030. For the projection to be realized, the country should have an average growth of 4% per year until 2030. If the prognosis is correct, Brazil will arrive in 2030 as the fifth largest economy.

For Russia, it is estimated that it might be the sixth biggest economy in 2050. In this case, the projections indicate that as early as 2018, the Russian GDP will exceed the Italian. In 2024, it will be greater than that of France, and by 2028 Russia will surpass the United Kingdom and Germany.

It is also expected that by 2050, India will have the third largest economy, behind only China and the United States. However, it is considered that the country needs to resolve issues such as its poor infrastructure and lack of trained manpower in sufficient numbers.

BRIC countries met for the first time in an official summit in June of last year in Russia. The central theme of discussion was the global economic crisis, which began in 2008 and the role of the dollar as reserve currency and its possible replacement.