“Bush’s legs” are ready for their triumphant return to the Russian market. American poultry makers have agreed to meet Russia’s requirement to refuse from the chlorine treatment of poultry. The danger of a certain concentration of chlorine in the US poultry became a formal reason for Russia to ban the import of poultry from the USA in the beginning of 2010. 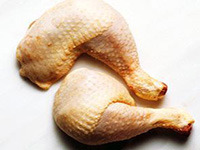 “We have the information that American enterprises are working to refuse from the chlorine treatment of poultry. We are satisfied with the fact that our American partners observe national standards of the Russian Federation,” Interfax quoted Russian Surgeon General Gennady Onischenko as saying.

It is not clear, though, when shipments of US poultry to Russia are going to be resumed. “This question is not for me,” Onischenko told Interfax.

Prices on domestic poultry went 15 percent up after it became known that there would be no American poultry on the Russian market.

Russia is not the only country that bans chlorinated poultry. Such poultry is banned in the European Union too. Up to 90 percent of Russian poultry-making enterprises do not use chlorine in their production. They use cold air and harmless lactic and acetic acids.

However, Russian poultry makers are unable to fill the gap on the market which was formed after the ban of US products. Other importers would not be any good either. Prices on European poultry are higher, and there are no spare volumes of poultry in European countries.

Russia tried to find other suppliers too. For example, Prime Minister Putin said during the meeting with his Turkish counterpart in February that Russia could buy poultry from Turkey.

The Russian poultry market depends on the import a lot. In 2009, about 35% of the poultry sold in Russia was imported. The share of import was over 50% before 2003, when Russia introduced import quotas.

It is not ruled out that Putin’s suggestion to Turkey played a decisive role in the decision of US poultry makers to refuse from the use of chlorine in the production of poultry. They did not want to do it in January but were very agreeable in March.