Today information was released regarding the material assets of Russian President Dmitry Medvedev and Prime Minister Vladimir Putin for 2009. According to the official data, the leaders’ income was quite moderate, and has even decreased compared to 2008. It looks like the crisis did not spare the Russian leaders. 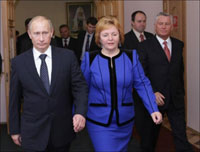 Mr. Medvedev and his wife Svetlana own a 368-square-metre apartment in Moscow and 4,700 square meters of land. Medvedev also owns a 1948 “Pobeda” vehicle.

Medvedev’s wife has only one bank account in her name with 7,503 rubles 89 kopeks ($250). If it was not for the state provision, she would be able to survive renting two car parking spaces or selling her 1999 Volkswagen Golf.

But other Russian government officials display much larger wealth disproportionate to modest salaries of the leaders.

Another top earner was Deputy Prime Minister Alexander Khloponin, a plenipotentiary envoy to the President in North Caucasus Federal District, who declared earnings of 68 million rubles ($2.3 million), plus 137 million rubles ($4.7 million) from his wife. The couple owns two Mercedes Benz S-class limousines, a Bentley Arnage, a Jaguar Daimler, a Harley Davidson and a yacht Fantom-46.

The third place belongs to the Transportation Minister Igor Levitin with 21.6 million rubles ($720,000) and Energy Minister Sergey Shmatko. The level of income shows where the most money is made in Russia – natural resources, the Caucasus and transportation (especially, pipe transportation). But of course, there is no direct connection.

The complete list of officials, their incomes and assets can be obtained from government websites. Meanwhile, according to the polls conducted by All-Russia Public Opinion Research Center, approximately 70% of Russians do not trust the information provided by the officials.

Experts speculate about possibilities of accumulating finances in the accounts of off-shore companies that are not declared. There would be more truth in finding off-shore accounts than reading official declarations. Yet, ordinary mortals do not have access to this kind of information.