Russian cellular retailers have sold 24.6 percent more cell phones from January till March of the current year in comparison with 2009. In total, Russian customers have purchased seven million cell phones during this period. The average price on cell phones has dropped by 18 percent during three months of this year. One may conclude that the retail home market of cellular phones is stabilizing. 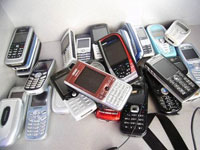 Russia ’s largest cell phone retailer, Euroset, said that the turnover of the domestic market of cell phones made up 31.6 billion rubles in the first quarter of 2010, which marked a 2.1% increase in comparison with 2009 and a 25% decrease vs. the pre-crisis first quarter of 2008.

It is obvious that the market has not recovered after the crisis, experts believe. They say that the increase of sales volume is connected with the period when people begin to replace their old phones, which they purchased before the economic crisis. A cell phone usually lasts for 30-36 months.

Russians mostly prefer Nokia phones. The phones of this renowned company made up 40 percent of all the phones sold. Samsung follows the Finnish maker with 36 percent.

LG follows the two most popular makers with 13 percent of sold mobile phones. Sony Ericsson continued to lose its positions on the Russian market and hit the level of only three percent. Experts say that this company prefers not to produce cheap devices and concentrates on relatively expensive phones.

In the USA, the market of cell phones has been dominated by smartphones recently. The sales of smartphones in the United States have increased by 29 percent during the recent six months and will continue to grow in the foreseeable future. People prefer to buy either cheap simple phones or highly functional multimedia smartphones. All intermediate devices do not enjoy any demand.

In Russia, people mostly prefer cheaper cell phones due to the crisis. However, the popularity of smartphones among Russian customers has been growing recently and hit the level of 13-15 percent as of the end of 2009.