Will Russia Be Able to Feed Itself?

Russian stores are filled with foreign food. Beef is imported from Brazil and butter comes from New Zealand. Long transportation and shipping expenses do not prevent imported products successfully competing with Russian products both in quality and price. 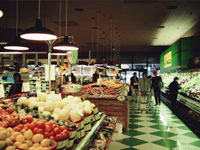 Will Russia Be Able to Feed Itself?

Russian officials decided to put an end to the invasion of imported goods. In early February, President Dmitry Medvedev set an ambitious goal for the government, to have 80 to 90% of Russian products in stores in five years. The goal is registered in the Food Safety doctrine. Experts believe that it is possible theoretically. Yet, the officials are not eager to work with Russian farmers and food manufacturers.

The Food Safety doctrine has been in development for many years. In the 1990s, the country had no finances for its implementation and in the fat 2000s filled with oil dollars it had no desire to implement it. The document itself is quite useful . Russia has up to 10% of the world land appropriate for agriculture, but stores still sell Australian cherries and Turkish tomatoes.

“The country has to have a high level of food provision,” says Yelena Turina, director of the Institute for Agricultural Marketing. “ It is especially true when we have an enormous potential for agricultural development . First of all, we could reduce our dependence on the world market and price fluctuations. Second, it is abnormal when 50% of all consumed chicken comes from the US. What if they decide to stop the supply ?”

It was high dependency on imported sugar that caused atypical price growth. In January alone, the prices rose nearly 10%, and it is not the limit.

“The only problem I can see is with tropical vegetables and fruit. We can’t change our climate. Plus, even considering shipping fees it is more profitable to grow certain products in other countries,” Turina explains.

Despite popular opinion, chain stores would be happy to buy Russian products.

Normally high-end goods are imported from abroad, for example, cheese and wines from Europe, or tropical fruit from warmer countries. But the stores have to also import products that could be produced in Russia. One of the interviewed store managers said they did not have enough suppliers of meat, fish, vegetables and fruit. It is more expensive to buy Russian fish than Norwegian.

First of all, Russia has to supply itself with products it can produce in Russian climate.

“We have a high level of food safety for a number of foods,” Yelena Turina says. “We can provide ourselves with potatoes, grain and oil nearly 100%. The situation with meat, milk and vegetables is more difficult.”

The meat situation keeps improving year after year. In particular, production of poultry meat grows by 15% a year. The share of imported chicken thighs on the Russian market has decreased to 24%, while two years ago it was nearly 40%.

Russia does not have any of this yet; therefore, the issue of Russia’s ability to feed itself remains open.