The meeting of G7 finance ministers and central banks chiefs opened the Canadian Arctic town of Iqaluit on February 5. Russia was not invited for the meeting, Russia’s deputy finance minister Dmitry Pankin said. Therefore, the meeting will be held in the format of the 1990s, i.e. the Group of Seven. Official spokespeople for Russia’s Foreign Ministry said that such a decision was erroneous. 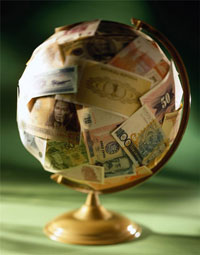 Dmitry Pankin stated in the middle of January of this year that Europe would most likely not invite Russia for the meeting of finance ministers in Canada. The official added that it should not be interpreted as an intention to diminish Russia’s role in the international event. He said that it was connected with alternations in the format of the meeting itself. The format would change because of the growing role of the Group of 20 (G20). The G7, the official added, would discuss only several questions excluding the ones that the group traditionally discussed with Russia.

Spokespeople for Canadian finance ministry said that the G7 decided to retrieve the traditional format of meetings against the background of the growing role of the Group of 20.

In Canada, the ministers will pay special attention to reforms in the financial sphere because someone already begins to show vestiges of arrogance which became the initial cause of the global financial crisis, Itar-Tass reports.

“The decision not to invite Russia for a regular meeting of finance ministers and central banks chiefs of the Group of Seven was erroneous. It reflects old political stereotypes,” Andrei Nesterenko of the Russian Foreign Ministry said Thursday, RIA Novosti reports.

“Making strategic decisions concerning the financial and economic structure of the world is impossible nowadays without the participation of other leading members of the international community, such as Russia and world’s leading developing countries,” the official added.

Russia began to participate in G7 meetings in 1991. In 1994 the meetings were referred to as “seven plus one.” In 1996, Moscow hosted a special summit of the G7 devoted to nuclear security, and Russia took direct participation in the meeting. Two years later, Moscow hosted the G7 ministerial meeting on the issues of energy. In 2002, G7 leaders officially acknowledged that Russia had demonstrated its potential as a full-fledged and relevant participant in the solution of global problems.

The first official meeting of the Group of Eight took place in Russia’s St. Petersburg in 2006. However, some experts do not consider Russia a full-fledged member of the elite international club. They say that the state of the Russian economy does meet the level of other G8 members. In addition, Russia is not a member of the WTO.