Let us spell a message to the Davos World Economic Forum before it gathers next week: Jobs are families. As unemployment rates reach record levels there can be no doubt that the current monetarist-market-oriented economic model contains vectors which create endemic instability, engender extreme instability in the labour market and send families lurching from one crisis to the next in a boom-and-bust climate. Perhaps the economists at Davos can do what they are paid for: produce an alternative that works. 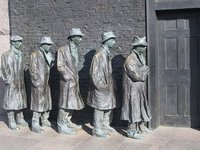 Hardly a bad deal? Ah yes, chortled the West, but how do you pay for it? Well, in answer to that how about we pretend the economy is a giant bank, then money is suddenly readily available isn’t it, and in great quantities? Like for example the three trillion dollars which had never existed for pensions and hospitals but which appeared miraculously to bail out the responsible bankers.

The economists at Davos should start to hang their heads in shame if they cannot come up with a model to improve the lot of hundreds of millions of people unemployed worldwide. If not, they should declare openly that the controlled economic model is better. Let us compare the zero unemployment of the controlled model with the current situation today.

According to the International Labour Organization’s annual report Global Employment Trends, released yesterday, the number of unemployed persons worldwide saw an unprecedented increase of 24 million between 2007 to 2009, reaching 212 million people.

Let us compare the zero unemployment rate of the controlled economy with the plight of workers in vulnerable employment, comprising 50.6% of the global workforce, or 1.5 billion people. 110 million people entered this sector in 2009. According to the report, a further 633 million workers earn less than 1.25 USD per day with another 215 million living on the margin of poverty and at risk of falling into that category.

As ILO Director-General Joan Somavia points out, “As the World Economic Forum gathers at Davos, it is clear that avoiding a jobless recovery is the political priority of today. We need the same policy decisiveness that saved banks now applied to save and create jobs and livelihoods of people. This can be done through strong convergence of public policies and private investment”.

Possibly, it can. But it won’t. People aren’t banks. Therefore those who meet at Davos couldn’t really care less, as we shall see. What a wonderful system they have created.