Apple declared war on its European competitor, Nokia. Finland’s world-known cell phone maker previously sued Apple over the supposed use of its patents. In return Apple accused Nokia of plagiarism and the use of 13 of its technological developments. 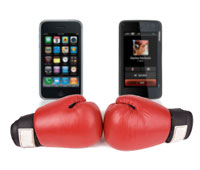 Apple filed a counterclaim against Nokia, the Associated Press reports. The maker of iPhone and Macbook accused the European competitor of the use of 13 of its patents, which the US-based corporation applied in the iPhone.

"Other companies must compete with us by inventing their own technologies, not just by stealing ours," Apple’s Bruce Sewell said.

Apple believes that Nokia particularly stole the video conference technology, the synchronization technology and the choice of color in the user interface. The computer giant believes that Nokia lags far behind the modern-day market of smartphones since Nokia still concentrates on the development of old-fashioned and traditional cell phones.

The fun started this past October when Nokia sued Apple for allegedly infringing on 10 of its patents that covered a wide range of mobile data technologies, including speed encoding and decoding, security and encryption. At the time, the Finnish smartphone manufacturer accused Apple of trying to get a "free ride" off of its intellectual property. Nokia asked for royalty from one million of iPhones sold worldwide.

Eldar Murtzain, an analyst with Mobile Research Group, said that Nokia started using a number of technological novelties before Apple. Now those novelties can be found in practically every phone.

Sergey Savin, an expert with J’son and Partners, believes that such suits can grow in number almost every day. For example, the Wi-Fi access and the touch screen technology appeared long before both Apple and Nokia started using them. The analyst also said that such disputes usually lead to nothing and end with amicable agreements.