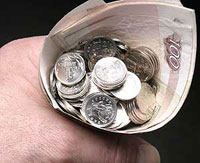 According to StatBanker, a financial statistics agency, the overall portfolio of funds deposited in the EU banks as of the third quarter of 2009 was 2091.2 billion Euros. Since the crisis reverberated in Europe, Europeans had fewer opportunities to save money, and the portfolio decreased by 8% within the last year, or 173.2 billion Euros. Therefore, the average European has 6,378 Euros in a savings account. If children and retired people are excluded from the calculation, the average savings account of an economically active European is 14,313 Euros.

According to the same agency, the overall portfolio of funds deposited by Russians is equivalent to 152 billion Euros. Interestingly enough, the decrease in savings in Russia is comparable to that in Europe and was 8%, or 11.8 billion Euros. Simple calculations show that the average bank deposit of a Russian citizen is 6 times smaller than that of a European, and amounts to 1,071 Euros. If only economically active group is considered, than the average deposit is 2,153 Euros, i.e., seven times less than in Europe.

Deposit rates in Russia are three times higher than in Europe. Yet, it is twice as profitable to deposit funds in the EU as it in Russia. For example, the weighted average interest rate for deposits made in Europe in September was 2.92%, whereas in Russia it was 9.25% for Ruble deposits and 5.35% for Euro deposits.

It is obvious that Russian banks offer a better rate. However, chronic Russian inflation changes the picture. Effective interest rate in Europe in September was 2.62%, while in Russia it was only 1.15%. Although the interest rate is not that high in both cases, the European one is still twice as large as the Russian one.

In this research, the average working European means a person who has a stable source of income and some bank deposit. It is not that simple with Russians. Although analysts like to say that Russians’ trust in banks is growing, Russians still prefer to keep their money “under thier mattress.”

According to a poll conducted in September by “Public Opinion” fund, 70% of Russians do not have a bank account at all. It would not be right to name poverty as the only reason. Mikhail Dyagilev, Director of the Institute for Globalization Issues, believes that one of the reasons is a fear to lose money to a bank. “People don’t trust banks. They feel very vulnerable and are afraid of swindlers and even simple technical errors, “he told to Novye Izvestiya newspaper.

Yet, earnings still matter the most. According to the Russian Statistics Bureau, as of the second quarter of 2009, the average monthly income of a Russian resident was approximately 17 thousand rubles. The average income of a European is 5.3 thousand dollars, while Russians make a little less than 600 dollars a month. This means that the average Russian is 8 times poorer than the average European. Mikhail Dyagilev thinks that the gap might be even bigger. “Russian people are very poor. According to a research conducted by sociologists, 10% of Russians do not have enough money to buy food. Middle class decreased to 12% within the last year, and we are just talking about the ability to buy regular consumer goods. 78% of population is just poor. People simply don’t have money to save.”

The last data received by sociologists proves this to be true. According to Romir research center, almost half of all Russians (48%) do not save money at all. Sergey Smirnov, Director of the Institute for Social Policy, thinks that it has to do with the fact that a tradition to save existed in Europe for a long time, whereas in Russia it is nonexistent. “Our people spend all they earn on their day-to-day needs,” explained the expert. He said that the gap between wealthy and poor in Russia is huge. “I do not think that we will be able to reach European rates in foreseeable future,” Smirnov said.