Russia's Arms Exports in 2009 to Make up 26 Billion Dollars

Anatoly Isaikin, the General Director of Russia's defense export giant, Rosoboronexport, stated that the company’s portfolio of orders for 2009 amounts to 26 billion dollars. As usual, the aviation industry is the leader. The second and third places go to the navy equipment and air defense equipment, respectively. However, some specialists believe that the future of Russia's defense export looks rather pessimistic. Only the air defense sector is more or less healthy. 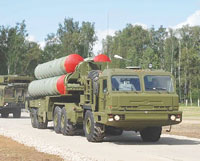 Russia's Arms Exports in 2009 to Make up 26 Billion Dollars

According to Interfax, Russia’s defense export department’s portfolio of orders will amount to 26 billion dollars in 2009. This statement was made by the department’s head Anatoly Isaikin.

He said that in the beginning of the year the sum was $25 billion. The official emphasized that he was referring to full-length contracts only, not signed letters of intent.

“The structure of the portfolio of orders changes, but the changes are not that crucial. The aviation industry takes the lead, as usually. This is the most expensive and sought-after part of our export. I think that in 2010 and 2011 the structure will remain the same,” Isaikin stated.

He said that the navy equipment and air defense equipment took the second and third places. He stressed that the export of land weapons was growing.

On Tuesday, Rosoboronexport signed contracts with Libya regarding the export of weapons. The company representatives refused to provide information on the price and contents of the contract.

“It’s not easy to evaluate the amount named by Isaikin, since he didn’t mention the duration for fulfilling these orders,” Alexander Khramchikhin, head of the Analytics Department of the Institute for Political and Military Analysis (IPMA) said in an interview with Vzglyad.

He believes that the future of Russia’s defense export is very pessimistic.

“There is no potential. We can say that the Russian defense industry has undergone degradation because for the first time since World War II we are exporting weapons,” Khramchikhin said.

He believes that Russian weapons are only purchased by the countries that can’t afford to buy weapons elsewhere, such as Iran, Venezuela, Algeria, and Vietnam.

Khramchikhin believes that the most promising developments are in the air defense sector. “The S-400 complex might be interesting,” he says. “The aviation sector is experiencing technical stagnation, and won’t be in demand a few years from now,” he added.