The employees of Russia’s Ford plant (on the outskirts of St. Petersburg), who do not agree to work four days a week instead of five, will be fired, Ekaterina Kulinenko, the head of Ford Russia PR department told Interfax. 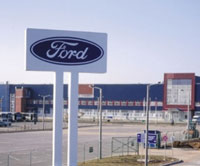 At least 127 workers set out protests in connection with the new four-day work schedule at the enterprise. Ford Russia will provide all necessary compensations to the people and continue to pay their average monthly salary to them – albeit for two months only - until they find a new job.

“Ford cuts the production of cars in Russia in connection with the current forecast for 2009. Our experts say that there will be about 1.4 million new cars sold in Russia in 2009, which implies a 50-percent reduction on the market in comparison with the previous year,” Kulinenko said.

Ford Motor Company opened a plant in the Leningrad region in the summer of 2002. The plant currently employs about 2,500 people.