The financial crisis has not affected the growth of the net sales of Russia’s leading enterprises during the year. The total revenue of all market members increased by 28.5 percent – to 31.6 trillion rubles and made up $1.072 billion. The total assets of Russia’s 500 companies gained 27 percent and increased to 56 trillion rubles over the year, Finance magazine wrote. 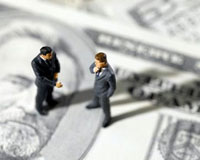 Gazprombank suffered the largest losses. Other companies on the negative list include X5 Retail Group, Alrosa, AvtoVAZ, RusHydro, Norilsky Nickel and several others.