Mikhail Prokhorov, Russia’s richest man according to Forbes magazine, confirmed his intention to become majority owner of the National Basketball Association’s New Jersey Nets. Mr. Prokhorov sent an offer to the team owners saying that the control shareholding of the basketball club be sold to his company, Onexim, for a symbolic price. In return, Prokhorov is ready to give a loan for the construction of a $700-million arena in Brooklyn and attract additional funds in Western banks. Mr. Prokhorov stated that he initiated the deal to push the Russian basketball to a new level of development. 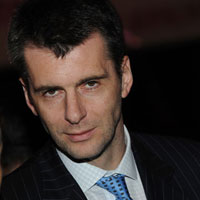 The billionaire said that Bruce Ratner, the club owner, had contacted him with an offer to participate in the project to build the Barclays Center arena in Brooklyn. The building is to be completed in 2011, The Kommersant newspaper wrote.

The arena with the capacity of 32,000 spectators is a central part of the Atlantic Yards project worth $3.5 billion. The project stipulates the construction of not less than 15 apartment buildings, an office tower and entertainment complexes. Prokhorov’s Onexim will also become a shareholder of the basketball club, which will be renamed to Brooklyn Nets after it moved to the new arena.

Onexim will provide a loan for the construction of the new arena in Brooklyn secured with a considerable loan in the project. New Jersey Nets sells the control shareholding to Onexim for a symbolic price. Prokhorov’s company attracts an additional loan in Western banks.

“I believe, if it works out, it will be a unique deal,” Mikhail Prokhorov said.

Prokhorov’s conditions differ from those proposed by Bruce Ratner. A source close to Onexim said last week that Mr. Ratner just wanted to receive a loan for the construction of the arena pledging a large shareholding of the club, but keeping an opportunity to redeem the shares. Prokhorov’s ownership of New Jersey Nets’ shares was considered just as an option.

Bruce Ratner’s current business affairs do not allow him to haggle. Moreover, US media reported that Mr. Ratner did not need his club much. It has been difficult for him to maintain the team: the turnout for the matches of the team dropped by 29 percent last season, which required a 30-million-dollar investment. Brushing all those things aside, Mr. Ratner is a developer. He purchased New Jersey Nets five years ago to obtain the right to implement the Atlantic Yards project.

Sources close to Bruce Ratner said last year that he was ready to bid farewell to the problematic club if he could obtain the funds for the construction of the stadium. The arena will be busy during 280 days in a year, which is obviously quite profitable.

Mikhail Prokhorov also said that Russia would win a good place in the elite of the world basketball, gain access to all modern training techniques and receive other opportunities that will be only beneficial for the Russian basketball.

Mr. Prokhorov also said that Russia’s professional basketball league depended on either the good will of the governors or the financial opportunities of wealthy entrepreneurs who have interest in sport.

Mikhail Prokhorov (born May 3, 1965) is a Russian self-made billionaire and oligarch. After graduation from Moscow Finance Institute he made his name in the financial sector and went on to become one of Russia's leading industrialists in the precious metals sector. He is the former chairman of Norilsk Nickel, the world's largest producer of nickel and palladium, and the current chairman of Polyus Gold, Russia's largest gold producer.

Prokhorov is currently the richest man in Russia and the 40th richest man in the world according to the 2009 Forbes list with an estimated fortune of $9.5 billion.

In May 2007, Prokhorov launched a $17 billion private investment fund, Onexim Group, focused on the development of nanotechnology, including hydrogen fuel cells, as well as other high-technology projects and non-ferrous and precious metals mining.