Madeleine Albright: USA No Longer Intends To Be World's No.1 State

A round table discussion titled “Mass Media and Entrepreneurship” took place in the city of Omsk, Siberia, within the scope of the Young Entrepreneurs International Business Forum. Pravda.Ru’s General Director Inna Novikova delivered a key report at the forum. 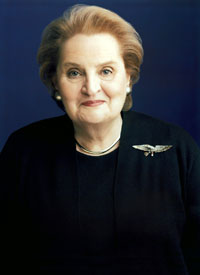 Madeleine Albright: USA No Longer Intends To Be World's No.1 State

Hundreds of participants gathered for the discussion, which was devoted to the questions of cyberspace.

Inna Novikova reported about the history of development of online media in Russia, which basically started with the creation of the Pravda.Ru website, including its English version.

The report was also about contemporary projects of Pravda.Ru Holding – Medpulse.ru, Missus.ru, Bigness.ru, Fark.ru and others. The subjects, which Ms. Novikova touched upon in the report – the specifics of domestic and home advertising, anti-spam and anti-virus defense and others – aroused great interest with the participants of the round-table discussion.

A number of video conferences took place within the scope of the meeting – with directors of Russia’s largest online resources: Vadim Gorshenin, the chairman of Pravda.Ru’s board of directors, Gherman Klimenko, the General Director of Liveinternet.Ru, and Aleksey Katkov, the business manager of Mail.Ru.

They spoke about various concepts of development of Internet resources, about the blogosphere, the operation of online media on the Russian Internet, about commercial projects, their profitability and perspectives.

Alexander Yanikovsky, the director of Pravda.Ru’s sales department, took part in the video conference too. Mr. Yanikovsky reported about the principles of promoting advertising services on the Internet.

The experts, who took part in the above-mentioned discussion, said that the amount of online advertising would reach the level of TV advertising during the upcoming eight years.

The Young Entrepreneurs International Business Forum, titled “Joining Forces to Define the Future,” held on September 13-17, is a key event within the scope of the Year of the Youth in the Russian Federation.

The Committee for the Organization of the Year of the Youth in Russia is chaired by Prime Minister Putin.

Former US Secretary of State Madeleine Albright took part in the forum too. She particularly participated in the meeting titled “Non-Economic Aspects of Entrepreneurship.”

Madeleine Albright said during the meeting that America no longer had the intention of being the first nation of the world.

Ms. Albright started her speech in Russian. “Hello and thank you! It’s a pleasure for me to be here,” she said in Russian. Albright wrote in her autobiography that she was trying to learn some Russian during the 1960s.

The former US Secretary of State surprised the audience with her speech. She particularly said that democracy was not the perfect system. “It can be contradictory, corrupt and may have security problems,” Albright said.

America has been having hard times recently, Albright said.

“We have been talking about our exceptionalism during the recent eight years. Now, an average American wants to stay at home – they do not need any overseas adventures. We do not need new enemies,” Albright said adding that Beijing, London and Delhi became a serious competition for Washington and New York.

“My generation has made many mistakes. We give the future into the hands of the young. Your prime goal is to overcome the gap between the poor and the rich,’ the former head of the US foreign political department said.

Read the originals in Russia here and here