Russia Cuts Import of US Poultry to China's Benefit

Russia purchased a lot less of US poultry than China in 2009 for the first time in many years. The USA shipped 336,500 tons of poultry to the Russian market during seven months of the current year. China purchased 374,100 tons. 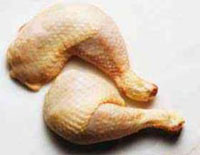 Russia Cuts Import of US Poultry to China's Benefit

Russian experts believe that the reduction of Russia’s import of US poultry marked the beginning of a long-standing trend, which emerged as a result of the cut quotas, higher duties on out-quoted poultry and also because of Russia’s developing poultry industry, RBC Daily reports.

Russia reduced the import of US poultry during seven months of the current year by 22.7 percent in comparison with the same period of 2008 – to 336,500 tons. China imported 374,100 tons from January to July of this year. As a result, the US Poultry and Egg Export Council (USAPEEC) confirmed that China had become the prime consumer of US poultry.