The Russian tobacco market has been showing a curious trend recently. The cheapest and premium class cigarette brands currently enjoy the biggest demand in Russia. Many tobacco companies focus their efforts on the inexpensive segment and resume the production of Soviet brands, BFM.ru business portal said. 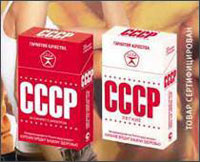 “According to our estimates, the reduction of the Russian tobacco market during the first half year made up 3-4 percent,” Kingsley Wheaton, the managing director of British American Tobacco Russia (BAT Russia) said. The sales of cheap cigarettes are growing, but they are growing in the premium segment of the market too, he said.

Another participant of the Russian tobacco market – Philip Morris – also reported a growth in the sales of its low price segment cigarettes (Bond Street). The sales gained 35 percent during the second quarter of the year – Optima cigarettes went 23 percent up. More expensive brands of the company demonstrated negative dynamics in their sales. Marlboro dropped by 19 percent with Parliament losing 4.3 percent.

BAT Russia took account of the changing demand and launched two new brands – Capri slim cigarettes (prices at $0.8 per pack) and The Golden Fleece (Zolotoye Runo), - a legendary Soviet brand which the company relaunched in April (priced up to $0.48 per pack).

The cigarette brands with the Soviet past from another company, Nevo-Tabak, also managed to improve their sales. The sales of such brands as Arktika, Troika and Leningad improved considerably during the recent six months.

“BAT Russia is not a pioneer when it comes to the launch of iconic Soviet cigarettes. This has been happening on the market of alcohol beverages too. One may recollect the fight of the Moscow Distillery Cristall for such well-known Soviet brands as Pshenichnaya and Stolichnaya. Dairy companies design Soviet-style packaging to win customers’ attention to their products. They hope that the Soviet style packaging will make many recollect their past and buy the product that they know, not something new that they never tried before,” Sergey Tishenko, a senior expert with Business System Development Auditing Company says.