The number of Internet users in China has exceeded the number of the population of the United States of America. The majority of China’s cities and towns are connected to the World Wide Web. Even 92.5 percent of Chinese villagers can enjoy the Internet at their homes via telephone lines. 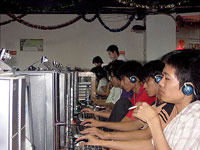 About 338 million Internet users have been registered in China as of the end of June 2009. Their number grows every hour: 40 million Chinese connected to the Internet during the recent six months.

The majority of Chinese nationals use the Internet to monitor news and take part in online discussions and social networks. Many prefer to use online stores to buy there something that they need.

However, China still lags behind the so-called developed states: only every fourth Chinese can boast of having the Internet access.