Burj Dubai, the tallest building in the world, will be opened in United Arab Emirates in December of this year with a three-month delay, The National newspaper wrote with reference to Emaar Properties, the company that builds the tower. 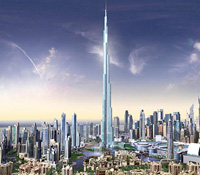 Arab media reported in January of this year that the official ceremony to open the world’s tallest tower was scheduled for September 9. The opening of the skyscraper has been delayed over the need to complete exterior and interior works. The tower reached its final height – 818 meters – in January of 2009.

Burj Dubai, a supertall skyscraper under construction in Dubai, United Arab Emirates, is the tallest man-made structure ever built. The total budget for the Burj Dubai project is about US$4.1 billion, and for the entire new "Downtown Dubai", US$20 billion, according to Wikipedia. Mohamed Ali Alabbar, the CEO of Emaar Properties, speaking at the Council on Tall Buildings and Urban Habitat 8th World Congress, said that the price of office space at Burj Dubai had reached US$4,000 per sq ft (over US$43,000 per m2) and that the Armani Residences, also in Burj Dubai, were selling for US$3,500 per sq ft (over US$37,500 per m2).