Gazprom's deals to be a red flag to Europe 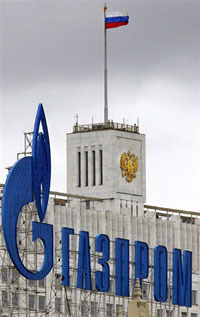 Gazprom's deals to be a red flag to Europe

Gazprom has entered an agreement with Azeri national energy company SOCAR to purchase Azeri gas at a price of $350/thousand cubic meters. Initial volumes of 500 mcm for 2010 are modest, but Gazprom is allegedly to be a preferential buyer (whatever that means) for gas from the second stage of the immense Shan Deniz field.

The price in the deal is very interesting, given that Gazprom is balking at paying the same price from Turkmenistan (admittedly the Azeri gas is closer to market, and should receive something of a premium). Indeed, recent reports tend to confirm the conclusion that the gas pipeline “explosion” in Turkmenistan was just a consequence of the Russian reneging on its contract to buy gas at $345 from the Turkmen, a price that seemed like a good deal at the time, but which looks very rich given the current market:

Gazprom wants Ashgabat to reduce either the price or the volume of Turkmen gas delivered to Russia; or some combination of the two reductions. In either case, Turkmenistan’s national income (based almost entirely on gas exports) would be severely hit.

Russia ’s prolonged stoppage puts Ashgabat under growing pressure to re-negotiate the existing agreements. High-level Russian delegations have been descending on Ashgabat almost on a weekly basis recently. During June, for example, Russian First Deputy Prime Minister and concurrently Gazprom Chairman Viktor Zubkov, Gazprom CEO Aleksei Miller, and the company’s vice-president and Gazexport Director-General Aleksandr Medvedev, held talks one after the other in Ashgabat with President Gurbanguly Berdimuhamedov and other Turkmen officials.

Moscow apparently feels that it has the upper hand and can continue the import stoppage as long as necessary. On the occasion of Gazprom shareholders’ annual meeting, just held in Moscow, Medvedev simply recommended to “wait and see how the talks proceed” with Turkmenistan. More to the point, Miller indicated to the press that Ashgabat has no alternative option for export or swap operations until the Turkmenistan-China pipeline comes on stream, Interfax reports.

Ashgabat is intensifying its contacts with the European Union, European companies, and the United States in search of export diversification options for the future. Meanwhile, China provides the first alternative option at hand.

It must be particularly irksome to Turkmenistan that at the same time Gazprom is stiffing it by saying that $345 is too high a price, and that it doesn’t need all the gas it contracted for, it is running off to Azerbaijan to enter into a deal to buy additional volumes at $350. Square that circle, dudes.

Presumably the wily Azeri President Ilham Aliyev is well aware of Gazprom’s practices, and is watching Gazprom’s heavy-handedness with Turkmenistan carefully. So why would he deal with this devil? Perhaps this is wishful thinking on my part, but what would make sense is that Aliyev is losing patience with European dithering over Nabucco. By showing a willingness to deal with Gazprom, he is sending a shot across the bow of the EUnuchs, letting them know with actions rather than words that they need to move sooner rather than later or Nabucco is going to turn into a, well, pipe dream.

Will the Europeans get it through their thick skulls? I highly doubt it. They are so divided–with Russia and Gazprom merrily promoting and exploiting those divisions–that they will be mightily pressed to get their act together soon. If they don’t, Azerbaijan may figure that it has no real alternative but Gazprom. And what a pity that would be.