Boeing Co. said the 787 Dreamliner, already two years behind schedule, will miss its June 30 first- flight target and a new delivery timetable won’t be available for weeks. Boeing shares fell the most since November. 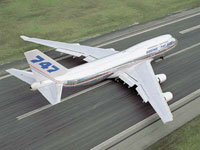 Monitors on the body above the wing showed stresses beyond what models predicted and there was little point flying in a reduced test pattern, Scott Carson, Chicago-based Boeing’s top commercial-plane executive, said on a conference call today.

The 787 was planned for delivery in next year’s first quarter and a delay will be the fifth for Boeing, which has lost more than half its market value since the first postponement in October 2007. Carson had said June 16 at the Paris Air Show the “airplane could fly today” and reiterated the plan to fly by month’s end. Boeing knew about the issue then and didn’t decide until June 19 to scrub the flight, he said today.

“We had been through preliminary analysis of data and were of the mind that we could enter flight test with minor modifications,” Carson said on the call. After the development team’s work narrowed the flight pattern, “we made the call to delay the process.”

Boeing fell $3.03, or 6.5 percent, to $43.87 at 4:15 p.m. in New York Stock Exchange composite trading, the most since Nov. 6. The company trails only Toulouse, France-based Airbus SAS in commercial-jet making, Bloomberg reports.

Boeing announced its fifth delay in the delivery of its latest aircraft, the 787 Dreamliner. Boeing has 865 orders for the $178 million aircraft, which is designed to cost 20 percent less to operate and maintain. A big reason for these savings is the 787's use of composite materials -- for example, All Nippon Airways, which is to be first to receive the 787, said in April that fuel savings and higher revenue from the higher capacity 787 could add $100 million in fiscal 2011.

But the very composite materials that are saving money for airlines are now contributing to the problems that delayed the 787 for the fifth time. And those problems raise questions about whether it can ever be safe to fly -- which would probably scare passengers from boarding the 787.

Composites are lighter and stronger hence able to fly more fuel efficiently. But engineers don't completely understand how aircraft made of composite materials will respond to the stresses of actual flight. This incomplete understanding is reflected in the computer models they use to design the aircraft. The reason for the fifth delay is that the actual 787 did not behave the way the model predicted.

Specifically, Boeing found that portions of the airframe -- those where the top of the wings join the fuselage -- experienced greater strain than computer models had predicted. Boeing could take months to fix the 787 design, run more ground tests and adjust computer models to better reflect reality, dailyfinance.com reports.

And this is what raises questions about the 787's safety. If engineers continue to be surprised by the 787's response to real-world operating stresses, there is some possibility that the testing process might not catch all the potential problems with the design and construction of the aircraft.

Moreover, the Federal Aviation Administration (FAA) has already recognized that composite materials require new methods of inspection for cracks. Maintenance personnel inspect metal aircraft for cracks through visual inspection. However, several weeks ago the FAA recommended X-ray and ultrasound inspection of carbon-reinforced plastic rudders on Airbus A-330 and A340 aircraft.