Boris Gryzlov, the speaker of the Russian Parliament, the State Duma, said that the participants of the Economic Forum in St. Petersburg would discuss a possibility of making ruble coins from precious metals. 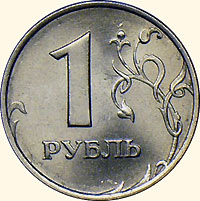 “We could offer the world the Russian ruble made of palladium. It would be a very strong currency. One may recollect the golden ruble, which Russia had during the tsarist times. It was a freely convertible currency and was circulating very well,” Gryzlov told reporters Thursday.

The President of the Association of Russian Banks, Garegin Tosunyan said that the coins made of precious and semi-precious metals would obviously be in demand on the market. “It has little to do with convertibility, but it would be quite normal as a measure against inflation and devaluation. Why not?” he said.

State Duma deputy Anatoly Aksakov believes that such a measure would not be effective.

“Such coins will become a numismatic rarity, a must-have for private collectors. Golden ten-ruble coins used to play a positive role in domestic and international settlements indeed, although it was the period of hyperinflation. The Russian economy should be modernized to make the ruble attractive.

Palladium is a rare and lustrous silvery-white metal that was discovered in 1803 by William Hyde Wollaston, who named it after the asteroid Pallas, which in turn, was named after the epithet of the Greek goddess Athena, acquired by her when she slew Pallas.

Palladium, along with platinum, rhodium, ruthenium, iridium and osmium form a group of elements referred to as the platinum group metals (PGMs). Platinum group metals share similar chemical properties, but palladium has the lowest melting point and is the least dense of these precious metals. The cost of one gram of palladium makes up about $8.