The US dollar is not Russia’s basic reserve currency anymore. The euro-based share of reserve assets of Russia’s Central Bank increased to the level of 47.5 percent as of January 1, 2009 and exceeded the investments in dollar assets, which made up 41.5 percent, The Vedomosti newspaper wrote. 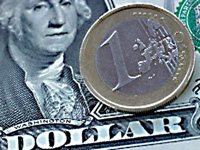 The dollar has thus lost the status of the basic reserve currency for the Russian Central Bank, the annual report, which the bank provided to the State Duma, said.

In accordance with the report, about 47.5 percent of the currency assets of the Russian Central Bank were based on the euro, whereas the dollar-based assets made up 41.5 percent as of the beginning of the current year. The situation was totally different at the beginning of the previous year: 47 percent of investments were made in US dollars, while the euro investments were evaluated at 42 percent.

The dollar share had increased to 49 percent and remained so as of October 1. The euro share made up 40 percent. The rest of investments were based on the British pound, the Japanese yen and the Swiss frank.

The report also said that the reserve currency assets of the Russian Central Bank were cut by $56.6 billion. The losses mostly occurred at the end of the year, when the Central Bank was forced to conduct massive interventions to curb the run of traders who rushed to buy up foreign currencies. The currency assets of the Central Bank had grown to $537.6 billion by October 2008. Therefore, the index dropped by almost $133 billion within the recent three months.

The majority of Russian companies, banks and most of the Russian population started to purchase enormous amounts of foreign currencies at the end of 2008. The dollar gained 16 percent and the euro 13.5 percent over the fourth quarter. The demand on the US dollar was extremely high, and the Central Bank was forced to spend a big part of its dollar assets, experts say.

The change of the structure of the currency portfolio of the Bank of Russia has not affected the official peg of the dual currency basket, which includes $0.55 and 0.45 EUR.

The investments of the Bank of Russia in state securities of foreign issuers have been considerably increased, the report said. About a third of Russia’s international reserves are based on US Treasury bonds.