Russia's Central Bank cut key interest rates by half a percentage point to 12 percent to help the ailing economy and borrowers amid signs that inflation is slowing. 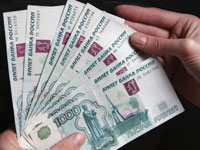 The cut in the refinancing rate, effective Thursday, is the second in a month.

Rampant inflation has made policymakers reluctant to lower lending rates, even though tight credit conditions have taken a severe toll on economic activity in Russia.

But government officials have said they expect the annual inflation this year to remain below 13 percent, down from 13.3 percent in 2008.

The Central Bank said it is also cutting the rate on a range of other lending facilities by half a percentage point.

The bank is slowly rowing back from policies of late last year, when it raised the refinancing rate by 1 percentage point, to 13 percent, in a bid to dampen inflation and support the sliding ruble.

The U.S. Federal Reserve has cut them to a range of 0-0.25 percent, while the European Central Bank has reduced them to a record low of 1 percent, the AP reports.

Deputy Central Bank Chairman Alexei Ulyukayev said recently, however, that inflation may fall "significantly below" the official forecast of 13% by year-end.

The ruble is undergoing a record-long rally against its target currency basket, climbing to 37.26 rubles in midday trading at the Moscow Interbank Currency Exchange, or MICEX, Wednesday, around 9% higher than this year's low of nearly 41 rubles at the end of January.

"Although the rate cut is theoretically a negative development for the ruble, we would not expect an immediate negative reaction to the news, given the positive backdrop from the relative strength in oil prices in addition to the broader optimism towards emerging markets," said Vladimir Osakovsky, head of strategy and research at UniCredit bank in Moscow.

The strength of the ruble has been virtually pegged to the price of oil, which has seen a persistent surge in recent weeks, approaching $60 a barrel Wednesday -- $20 above the level that the Russian central bank considers to be the minimum for the ruble to not devalue, the Wall Street Journal reports.

Most economists expect further piecemeal easing of the monetary policy, with UniCredit's Osakovsky predicting another cumulative rate cut of 150 basis points by year-end.