Former European Commission President Jacques Delors has expressed pessimism about the ability of the eurozone to survive the current economic crisis. 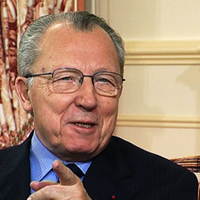 In an interview published in German economic monthly Capital, the French politician said "I could well imagine that the pressure of the strong on the weak to carry out better policy or leave the monetary union increases."

He said that while the 16-nation eurozone is not yet ripe enough for economic governance as the economic cultures among the single currency countries are too different, there must be more readiness to communicate.

"If the basic idea that there is a necessity for more prior consultation is not accepted, then I am pessimistic about the future of the euro," said Mr Delors.

He demanded that "federal" Germany, in particular, should accept a greater degree of co-operation.

Mr Delors - who served as president of the commission from 1985 to 1995, often referred to as Europe's greatest economic integration period and the heyday of Franco-German EU co-operation - indicated today's relations between Paris and Berlin are in dire straits, euobserver.com reports.

"Quite frankly, little or nothing is working [in that relationship]," he said, suggesting it is due to the fact that memories of a post-war Europe are "fading" and are treated with "indifference."

The EU summit will be focused on ironing out the bloc's position ahead of the G-20 summit of the world's leading economies scheduled for the beginning of April in London. Earlier this week, German Chancellor Angela Merkel and French President Nicolas Sarkozy urged that the EU take a leading role when it comes to reforming the global financial system.

This week's summit, however, will also take a look at a planned EU stimulus package aimed at boosting Europe's economy. Worth €5 billion, the package is intended primarily for improvements in the continent's energy infrastructure -- but the plan has yet to secure support from Berlin. Officially, Merkel's government has urged that the money be invested by 2010 at the latest and not, as currently foreseen, by 2013, spiegel.de reports.

But a report in the Financial Times Deutschland on Wednesday claims that Merkel is opposing the package in an effort to leverage advantages for the German telecommunications giant Deutsche Telekom. Citing "senior EU diplomats," the paper said that Berlin is seeking to guarantee Telekom access to broadband Internet without needing to negotiate with competitors. Under the measure, some rivals would be completely shut out of the broadband access.

European Commission President José Manuel Barroso on Wednesday urged Germany to give up its opposition to the €5 billion ($6.5 billion) package. "I very much hope that the EU can find agreement," he said in Brussels. "Our citizens don't want to hear words, they want to see deeds."