Every U.S. state and 95% of the nation's metropolitan areas will end 2009 with fewer jobs than they started with, while only two sectors — education and health services and government — will add workers. 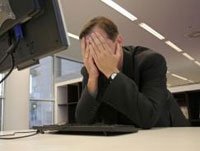 That's the grim prediction from economic consulting firm Moody's Economy.com that illustrates how the recession is touching Americans in every corner of the country.

And it means that, unlike in prior downturns, most people who lose their jobs can't simply pick up and move to find work, an issue compounded by the housing crisis. Such an unprecedented lack of mobility will make the downturn longer and deeper, economists at Moody's Economy.com, Wachovia and others say.

"There really is nowhere to hide in this economy," Moody's Economy.com chief economist Mark Zandi says.

"If you lose your job, it's not clear where you should move to find one or even what training or education you need to retool yourself," he says. "The hallmark of the current downturn is that it is so broad-based across industries, occupations and regions of this economy."

Workers in some states certainly will be better off than others. Employers in six states — Washington, Texas, North Dakota, Colorado, New Mexico and Nebraska — and Washington, D.C., are expected to shed less than 1% of their workers this year, UsaToday.com reports.

At the same time, Ohio, Missouri, Florida, Connecticut, Hawaii and Michigan are forecast to lose the greatest proportions of their states' jobs. Michigan, hit hard by a rapid decline in the U.S. automotive industry, is expected to shed more than 175,000 jobs this year, a 4.3% decline, according to Moody's Economy.com.

Nationwide, employers are expected to cut 2.7 million jobs this year after eliminating more than 2 million positions in 2008, according to Moody's Economy.com.

The amount of Americans out of work will probably grow. The labor market lags behind economic output, and with the U.S. economy widely expected to contract in the first half of the year, the unemployment rate could reach 9.0%. Even with the best-case scenario of an economic turnaround in the second half of 2009, the labor market wouldn't see an improvement at least until the end of the year.

"It's going to get worse before it gets worse," said Doug Roberts, chief investment strategist for Channel Capital Research.com.

Mark King, chief investment officer for Bell Investment Advisors, said it would take a double-digit employment rate to provoke a decline in stocks, indicating that Wall Street has already built a lot of pessimism into stock prices.