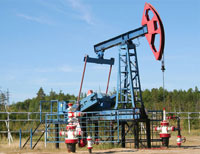 The United States reached peak oil production in 1971, as forecasted by M. King Hubbert, the Shell geologist. Before that time the US attained a form of glory in its oil age with spectacular discoveries in Texas, a robust industry, strong exports to the rest of the world and lots of free wildcatting. The oil age in the US also gave rise to novels and films, like Upton Sinclair’s Oil and of course George Steven’s vehicle with James Dean, Giant.

Russia appears to have peaked now without enjoying any such glory. Perhaps the promise of Khodorkovsky’s Yukos, which charged out of the gate and looked to deliver on the dream of a modern, efficient corporation was doomed by the oligarchical terms of its founding. Large mega-projects like Sakhalin also succumbed to the vagaries of the State, and now the bloated Gazprom looks more like a portrait of decay than an instrument of power. It’s not just the volatility in the price of Oil and Gas that was the undoing of Russia. It was Russia’s historical propensity to eat itself.

Russia’s oil industry now resembles the unbuilt buildings of Russia’s futurists, from the 1920’s. Production, which was boosted to new heights in 2007 has now fallen 1.00% in calendar year 2008. But the chatter out of Russia is much darker, than a 1.00% fall would suggest. First, Russia does not have as much easy oil as is found in the Arab states.

This makes Russia’s achievement in this decade, when it was able to match Saudi Arabia in daily production above 9 Mb/day, all the more impressive. But we know that a goodly portion of Russia’s ability to increase production from 2000-2008 comes directly from its previous collapse. In other words, Russia did not discover alot of new oil this decade. It simply went back to mothballed wells, many of which were aging. But while mothballed wells giveth, they also taketh away. They tend to have a surge flow after reopening, only to reach peak quickly thereafter.

More relevant now to the world however is the ability of Russia to export oil. 2008 saw Russian oil exports fall by over 5.00% and the outlook is not pretty from here. The fall in oil prices not only hurt Russia economically. Current prices are simply way too low for great swaths of Russian production to carry on profitably. While GDP per capita is still much lower in Russia than in the OECD, Russia simply does not have the kind of dirt-cheap labor or materials advantage that it enjoyed just 10 years ago. Very few oil producers do. And as a general point, oil at 45.00 continues to set the stage for a supply collapse. Russia is vulnerable to a huge drop in production.