The shares of Microsoft and Yahoo rose in price in premarket trading Wednesday after The Wall Street Journal reported Microsoft has talked to other media companies about teaming up to buy Yahoo's search business. 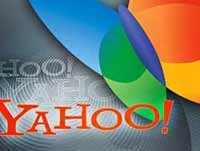 The paper reported Microsoft has spoken to News Corp., Time Warner Inc. and others about a way to complete the proposed deal, which was first announced on Feb. 1. Microsoft ultimately withdrew a $47.4 billion bid for Yahoo in May.

The Journal suggested that Microsoft would buy Yahoo's Internet search business, and the rest of the company would be combined with another outlet, like News Corp.'s MySpace or Time Warner's AOL.

The talks were described as preliminary, and citing sources familiar with the talks, the Journal indicated Microsoft may be having difficulty finding a partner.

Calls to both Microsoft and Yahoo were not immediately returned.

Microsoft and Yahoo! pursued merger discussions in 2005, 2006, and 2007, that were all ultimately unsuccessful. At the time, analysts were skeptical about the wisdom of a business combination.

On February 1, 2008, after its friendly takeover offer was rebuffed by Yahoo!, Microsoft made an unsolicited takeover bid to buy Yahoo! for US$44.6 billion dollars in cash and stock. Days later, Yahoo! considered alternatives to the merger with Microsoft, including a merger with internet giant Google or a potential transaction with News Corp. However, on February 11, 2008, Yahoo! decided to reject Microsoft's offer as "substantially undervaluing" Yahoo!'s brand, audience, investments, and growth prospects. As of February 22, two Detroit based pension companies have sued Yahoo! and their board of directors for breaching their duty to shareholders by opposing Microsoft's takeover bid and pursuing "value destructive" third-party deals.

In early March, Google CEO Eric Schmidt went on record saying that he was concerned that a potential Microsoft-Yahoo! merger might hurt the Internet by compromising its openness. The value of Microsoft's cash and stock offer declined with Microsoft's stock price, falling to $42.2 billion by April 4. On April 5, Microsoft CEO Steve Ballmer sent a letter to Yahoo!’s board of directors stating that if within three weeks they had not accepted the deal, Microsoft would approach shareholders directly in hopes of a electing a new board and moving forward with merger talks. In response, Yahoo! stated on April 7 that they were not against a merger, but that they wanted a better offer. In addition, they stated that Microsoft's "aggressive" approach was worsening their relationship and the chances of a "friendly" merger. Later the same day, Yahoo! stated that the original $45 billion offer was not acceptable. Following this, there has been considerable discussion of having Time Warner's AOL and Yahoo! merge, instead of the originally proposed Microsoft deal.

On May 3, 2008, Microsoft withdrew their offer. During a meeting between Ballmer and Yang, Microsoft had offered to raise its offer by $5 billion to $33 per share, while Yahoo! demanded $37. One of Ballmer’s lieutenants suggested that Yang would implement a poison pill to make the takeover as difficult as possible, saying "They are going to burn the furniture if we go hostile. They are going to destroy the place."

Analysts say that Yahoo!’s shares, which closed at $28.67 on May 2, are likely to drop below $25 and perhaps as low as $20 on May 5, which would put significant pressure on Yang to engineer a turnaround of the company. Some suggest that institutional investors would file lawsuits against Yahoo!’s board of directors for not acting in shareholder interest by refusing Microsoft's offer.

On May 5, 2008, Microsoft's withdrawal sent Yahoo!’s stock spiraling 13% lower to $23.02 in Monday trading and trimmed about $6 billion off of its market capitalization.

After Microsoft's failed bid to acquire Yahoo!, Microsoft is rumored to be looking at acquiring LiveDoor, a leading Japanese portal and the leading blogging service in Japan, to strengthen its position against Yahoo! Japan.

On June 12, 2008, Yahoo announced that it had ended all talks with Microsoft about purchasing either part of the business (the search advertising business) or all of the company. Talks had taken place the previous weekend (June 8), during which Microsoft allegedly told Yahoo that it was no longer interested in a purchase of the entire company at the price offered earlier -- $33/share. Also on June 12, Yahoo announced a non-exclusive search advertising alliance with Google. Upon this announcement, many executives and senior employees have announced their plans to leave the company as it appears that they have lost confidence in Yahoo's strategies. According to market analysts, these pending departures are also impacting Wall Street's perception of the company.