Americans disappointed in their country

Most Americans believe their country's economy is in decline and that its cities are experiencing economic troubles on a variety of fronts, according to a Zogby International Poll released Wednesday. 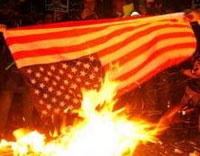 Americans disappointed in their country

But they are also worried about their individual well-being, the survey of 32,085 people found. More than two-thirds of respondents said they get less spending power from their paychecks than they did five years ago, and more than a quarter say unemployment has risen in their cities in the past five years. About a quarter said homelessness has increased in their cities over the last half-decade as well. In Detroit, Orlando, Tampa and Sacramento, more than a third said the homeless population increased.

Immigration is a leading issue for Americans, Zogby said, and more than half of those surveyed said stricter immigration laws will help their local economies. Nearly half believe illegal immigration has hurt their communities' economies, and two-fifths said any form of immigration hurts their cities. The mayors' group is encouraging cities to take action against climate change, and Zogby found city dwellers believe "going green" could help their local economies by creating jobs in the environmental sector and attracting businesses.

While Zogby did not explain which green programs Americans prefer, he said a majority of respondents said they would use mass transit if it were easily available in their cities. The poll was conducted between November 21 and December 12, Reuters reports.

In 2002, research showed that children and families were the largest growing segment of the homeless in America, and this has presented new challenges, especially in services, to agencies. Back in the 1990s, a teenager from New York, Liz Murray, was homeless at fifteen years old, and overcame that and went on to study at Harvard University. Her story was made into an Emmy-winning film in 2003, "Homeless to Harvard".

The Interagency Council on Homelessness (ICH), the federal branch responsible for overseeing homeless policy that was created under the McKinney-Vento Act, is now attempting a new approach to combat homelessness. For the first time, government officials are calling for an end to homelessness. To accomplish this goal ICH has adopted a strategy largely devised by the National Alliance to End Homelessness (one of many homeless advocacy organizations), which centers on the production and implementation of local 10-year plans to end chronic homelessness.

The idea is to get all of the necessary parties—local/state governmental agencies, businesses, non-profit organizations, service providers, faith-based entities, and homeless (or formally so) individuals—working in collaboration to devise and implement a 10-year plan for their respective community.